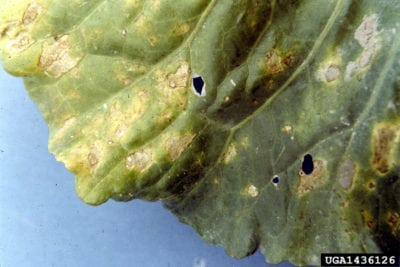 About Downy Mildew in Turnips

Downy mildew in turnips is caused by a fungal infection. Turnips are far from the only plant affected though. The fungal disease also infects the following plants:

This fungus attacks plant foliage. Damage to mature turnips is limited to the leaves closest to the soil, but young seedlings can be killed by downy mildew.

Symptoms of Turnips with Downy Mildew

Before you can start planning for control, you have to learn to recognize the symptoms of this infection. The first signs you are likely to see are faint yellow spots on the top of the leaves. This is followed by the fungal fruiting bodies. They appear as a fluffy or powdery-white mass of spores on the undersurface of leaves and give the disease its common name.

As the infection develops, tiny black dots appear on the upper surface of the turnip leaves. In mature plants, these develop into dark, sunken lesions. The leaves pucker, yellow, and can fall from the plants. Look for this especially in late spring and autumn. That is when the downy mildew is most damaging.

Identifying turnips with downy mildew is easier than treating turnip downy mildew. You’ll need to invest as much time and effort in preventing the disease as treating it. To achieve downy mildew control, keep the issue in mind as you plant. You want to use seed treated with hot water. If you are planting seedlings, be sure they are disease free.

Irrigation techniques are important in turnip downy mildew control, as they are in controlling any fungal infection of garden crops. Use sensible precautions to keep the seedlings as dry as you can, watering them very well but less frequently.

Don’t water in the morning since that’s when fungal spores are released. Space the plants a little farther apart than recommended in order to allow air to pass between them and dry them. Be sure your turnips get sufficient potash and other nutrients to make them less susceptible.

In wet weather, start a preventative fungicide spray program. Don’t stay loyal to one chemical, however, since the fungus may develop resistance. Instead, alternate fungicides.

Printer Friendly Version
Read more about Turnips
<PreviousNext>
Did you find this helpful? Share it with your friends!
FacebookTweetPinEmail
Related Articles
Newest Articles
You might also like…
Additional Help & Information