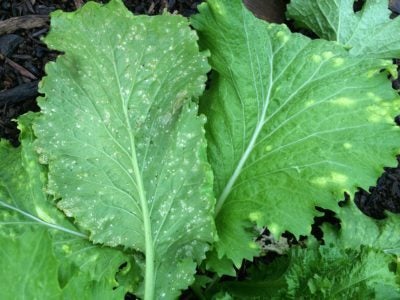 White rust fungus on crucifers is a common disease. Turnip white rust is the result of a fungus, Albugo candida, which is harbored by host plants and dispersed through wind and rain. The disease affects the leaves of turnips, causing primarily cosmetic damage but, in extreme cases, it can diminish leaf health to a degree where they cannot photosynthesize and root growth will be compromised. Read on to learn what to do about white rust on turnips.

About White Spots on Turnip Leaves

Turnip roots are not the only edible part of this crucifer. Turnip greens are rich in iron and vitamins and have a zesty tang that enhances many recipes. Turnips with white rust can easily be misdiagnosed as having some other disease. The symptoms are consistent with several other fungal diseases and certain cultural failings. Fungal diseases like these are promoted by several key environmental conditions. Good cultivation practices are crucial to management of this disease.

Turnip white rust symptoms start with yellow spots on the upper surface of the leaves. As the disease progresses, the undersides of the leaves develop tiny, white, blister-like pustules. These lesions can contribute to distortion or stunting of leaves, stems, or flowers. The white spots on turnip leaves will mature and burst, releasing sporangia that looks like white powder and which spreads to neighboring plants. Infected plants wilt and often die. Greens taste bitter and should not be used.

The fungus overwinters in crop debris and host plants such as wild mustard and shepherd’s purse – plants that are also crucifers. It spreads through wind and rain and can move from field to field quickly in perfect conditions. Temperatures of 68 degrees Fahrenheit (20 C.) encourage fungal development. It is also most prevalent when dew or moisture combine with the sporangia.

The fungus can survive for years until ideal conditions form. Once you have turnips with white rust, there is no recommended control except removal of the plants. Because the sporangia may survive in the compost bin, it is best to destroy them.

No registered fungicides are recommended, but some gardeners swear by formulas that control powdery mildew, a very similar looking disease.

Cultural practices are more effective. Rotate crops with non-crucifers every 2 years. Remove any old plant material before preparing the seed bed. Keep any wild crucifers well away from the beds. If possible, purchase seed that has been treated with a fungicide.

Avoid watering plants on leaves; provide irrigation under them and only water when leaves have a chance to dry before the sun sets.

Some seasons fungal diseases will be more aggressive but with some pre-planning your crop should be able to avoid any large scale white rust.

Printer Friendly Version
Read more about Turnips
<PreviousNext>
Did you find this helpful? Share it with your friends!
FacebookTweetPinEmail
Related Articles
Newest Articles
You might also like…
Additional Help & Information