Interplanting Vegetables In The Fall Garden 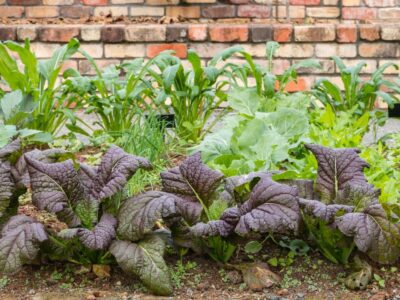 Interplanting is one aspect of intensive gardening which allows home gardeners to grow more produce in a limited space. While it’s common to think about intercropping spring and summer crops, gardeners can also interplant vegetables in their fall gardens.

Intercropping is a method of planting two or more crops in the same area rather than reserving the space for a single type of vegetable. Intercropping can include plants which are beneficial to each other, like the traditional “three sisters” method of growing corn, pole beans and squash together.

When planted together, beans enrich the soil by fixing nitrogen. Corn provides a support for the beans to climb. The prickly leaves of the squash plant deter animals from stealing the corn and they shade the ground, which conserves moisture.

Intercropping can also mean planting a second crop in the same space after the first has been harvested. This allows gardeners to grow two or three seasons of vegetables in the same space. It’s the most common method used when planting fall crops.

Another method of intercropping involves planting two crops with vastly different maturity dates next to each other. For instance, planting a fast maturing crop, like lettuce, in the spaces between tomato transplants means the lettuce will be harvested long before the tomato plants grow to their mature size.

In addition to producing more food in a given space, intercropping benefits insect pest control efforts. Due to the variety of plants in a given area, the bugs must work harder to locate their host plants. The increased space between host plants also makes it more difficult for invertebrate pests to move from host plant to host plant.

One of the easiest methods of intercropping fall vegetables is to replant vacant areas with cool season plants. For instance, as plants like onions or beets are pulled for table use during the summer, the holes can be filled with fall vegetables like carrots, spinach or kale.

Likewise, as pumpkin or cucumber vines begin to die back, consider popping a few broccoli, Brussels sprouts or fast maturing cabbages into the spaces between the pumpkin fruits. By the time these cool season plants need more room, the pumpkins vines will be gone and all that remains will be the ripening fruit.

When creating an interplanting garden plan that includes fall crops, gardeners can also take a plant’s frost tolerance into consideration. For instance, gardeners can interplant Swiss chard or spinach among a fall crop of bush beans. The beans will be ready for harvest in 50 to 60 days unless killed by an early frost. Nonetheless, the leafy greens can survive a frost and will ensure a fall crop is harvested from this area.

Here are three more autumn intercropping examples to get you started: