Frost On Plants – Information On Frost Tolerant Flowers And Plants 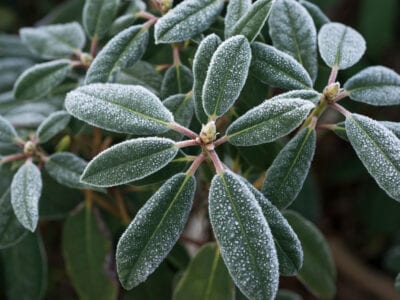 Waiting for the planting season can be a frustrating time for a gardener. Most planting guides recommend installing plants after all danger of frost has passed, but this could mean waiting until late spring in some areas, which poses a short growing season in some places. The solution, however, is to pick frost-resistant plants.

Most evergreen plants, both broadleaf and needle-like, make excellent frost plants. Frost tolerant fall vegetables will extend the growing season, especially with the help of cloches or row covers. Many frost tolerant flowers will enliven the dismal cold season landscape and produce the first hints of color in late winter or earliest spring as well.

Resistant plants are indicated by their hardiness rating. This is a number found on the plant tag or in horticultural references as the United States Department of Agriculture (USDA) zone rating. The highest numbers are zones where temperatures are warm to moderate. The lowest numbers are cool-season ranges, which are often exposed to freezing temperatures. Frost plants are tolerant of light freezes and can usually withstand such temperatures without serious physical injury. Non-hardy plants and frost can damage tender green tissues or even kill the root system.

Look for seeds that are frost tolerant, which indicates they are safe to plant outside before the danger of the last frost has passed. These would include:

Of course, there are many others, and keep in mind that even frost-resistant plants may not be able to withstand an extended freeze. It is best to protect new and recently sprouted plants with a cover or keep them potted and move the pots to shelter when snow and freezing temperatures persist. Mulch is also a useful protectant over early perennial plants to keep them warm and protect new shoots from the sting of icy weather.

Vegetables in the family Brassicaceae are extremely frost tolerant and grow well into the fall season or in the early spring season. These plants actually perform best in cooler weather and encompass foods like:

Some of the root crops that are tolerant of frost include:

There are even some greens that will continue to grow during periods of frost, such as the following:

All of these will give you wonderful garden additions to the family table well into the cold season. Sow frost-tolerant fall vegetables according to the seed packet instructions.

A trip to the nursery in late winter proves that pansies and primroses are two of the hardiest flowers. One of the hardy vegetables, kale, is also useful as a bright addition to frost-resistant flower beds. While crocus may poke their heads up through the snow and early forsythia and camellias provide landscape color, the following flowers will also add a rainbow of hues for beds and containers and are excellent choices for areas with early or late frosts:

Although there are many ways to incorporate frost tolerant flowers in the landscape, position these frost plants in areas where they will receive the maximum winter light, and where drying wind is not a problem.