Frost Tolerance Of Vegetables From Least To Most Hardy 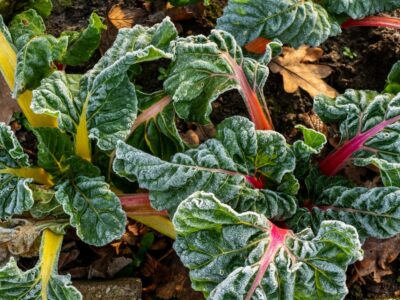 How cold can tomatoes tolerate? What about peppers, onions, and cabbage? Whether you’re planting in the spring or harvesting in the fall, knowing which veggies will survive frosts and freezes is essential for the success of your garden. Let’s look at how these terms are defined, and which veggie falls into each category.

If you’ve ever wondered how cold is too cold for vegetable garden produce, you’re not alone. Even experienced gardeners don’t always get it right. This is because cold tolerance is dependent on several factors such as length of the cold spell, preconditioning, and the type of vegetable.

Cold air is denser than warm air. It sinks while warm air rises. Temperatures at garden level are often cooler than the point where official temperatures are measured. This phenomenon also means low areas, like valleys, can experience frost when plants on higher ground are safe.

If you’ve ever wondered, “how cold can pepper plants tolerate,” the answer is not simple. A killing frost can occur when temperatures drop below 30 degrees F. (-1 C.) for five to ten minutes or when temps remain in the 31 to 32 degrees F. (-0.5 to 0 C.) range for several hours.

Generally speaking, these frost-tender vegetables should be harvested, or the plants protected, whenever a frost warning is issued:

Frost-tolerant veggies can survive several hours in the 28 to 32 degree F. (-2 to 0 C.) range, providing they have been preconditioned to cold weather. Plants exposed to dropping temperatures over the course of several weeks will make biological adaptions. They will be better able to withstand colder temperatures than those plants experiencing a sudden drop in temperature.

Thus, how cold can broccoli tolerate depends upon weather patterns, not single weather events. Veggies which can tolerate frosts and light freezes include:

The true heroes of cold tolerance are vegetables which can withstand freezing temperatures in the 26 to 28 degree F. (-3 to -2 C.) range. While meteorological freezes are measured by temperature, a biological freeze depends upon whether or not the water inside the plant’s cells and tissues turns to ice.

When this happens, the tissues are permanently damaged by the expansion of water as it freezes. Most often, frozen plant tissues take on a water soaked appearance after a freeze event. Plants, like those listed below, have more space between their cells and are better adapted to withstand internal freezing.

As a general rule of thumb, cold season crops like cruciferous veggies and root crops have the best cold tolerance. Dropping temperatures and shorter days also stimulate these plants to convert stored starches to sugars. Gardeners find many of these crops turn sweeter after a light frost in the fall.

Additionally, some root crops—like carrots and parsnips—can safely remain in the ground until it freezes. Other crops, like pumpkins and winter squash, will experience foliage die-back after a light frost, but the fruits may not suffer damage.

By learning which vegetables have the best cold tolerance, gardeners can often protect their spring plants and extend the fall harvest season by several weeks. Keep an eye on the weather forecast and protect vulnerable plants with row covers, cloche covers, or low and high tunnels.

Printer Friendly Version
Read more about General Vegetable Garden Care
<Previous
Did you find this helpful? Share it with your friends!
FacebookTweetPinEmail
Related Articles
Newest Articles
You might also like…
Additional Help & Information