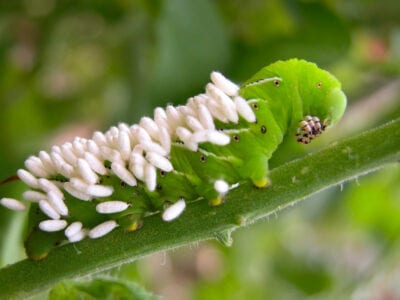 If you’re like most people, the idea of any type of wasp can set your nerves on edge. However, not all wasps are the scary, stinging type. In fact, we should all encourage the presence of parasitic wasps in gardens. Parasitic wasps, which aren’t the least bit interested in bothering humans, spend much of their lives working hard, either within or outside the body of a host insect.

Read on to learn more about these beneficial insects.

Parasitic wasps belong to the family Hymenoptera, which includes friendly honeybees and those angry, stinging wasps. Size of parasitic wasps vary greatly. Larger species can be nearly an inch (2.5 cm.) in length, while species that develop within the egg of a host insect tend to be miniscule.

When it comes to parasitic wasp identification, things get complicated. However, like other wasps, parasitic wasps have the appearance of a “waist,” which is actually the constriction between the insect’s abdomen and thorax. Most adults have two sets of wings, although some may be wingless in the adult stage.

Their antennae may vary as well and can be either short or long. Color? Again, there is no single answer, as parasitic wasps may be brown, black, or metallic green or blue. Some are marked with bright orange or yellow stripes.

There are many types of parasitic wasps in gardens and some have extremely complex and interesting life cycles. For example, some species are able to reproduce without help of male wasps, which apparently don’t even exist; the female is able to do it all by herself without mating.

Some species produce several generations of offspring in a single season, while others take more than a year to develop a single adult.

So, the life cycle of parasitic wasps is something you may want to research on your own, as the topic is beyond the scope of this article. However, we can say that, in general, parasitic wasps advance through a complete life cycle–egg, larvae, pupae, and adult.

All female parasitic wasps possess an organ called an ovipositor, located at the tip of the abdomen. This long structure allows the wasps to deposit parasitic wasp eggs inside host insects, even when the hosts are hidden within tree bark or cocoons.

Most eggs contain a single larva, but some species produce multiple parasitic wasp larvae within a single egg.

The host pests may become inactive very quickly, or may continue to live normally for a short while with the parasitic wasp larva growing inside its body. Once the larva is nearly mature, however, the host is a goner for sure. The larva may exit the host before pupating or it may pupate inside the body of the deceased host.