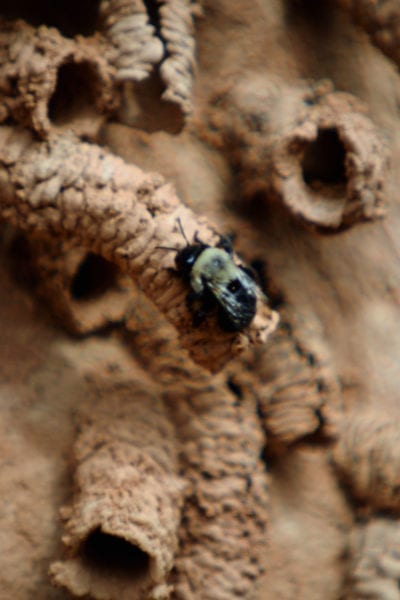 What are digger bees? Also known as ground bees, digger bees are solitary bees that nest underground. The United States is home to approximately 70 species of digger bees, primarily in the western states. Around the world, there are an estimated 400 species of these interesting creatures. So, what’s the dirt on bees that dig? Read on and learn about identifying digger bees.

Digger Bee Information: Facts on Bees in the Ground

Female adult digger bees live underground, where they build a nest about 6 inches (15 cm.) deep. Within the nest, they prepare a chamber with plenty of pollen and nectar to sustain the larvae.

Male digger bees don’t help with this project. Instead, their job is to tunnel to the surface of the soil before the females emerge in spring. They spend their time flying around, waiting to create the next generation of digger bees.

You may notice digger bees in areas of your yard where the grass is sparse, such as dry or shady spots. They typically don’t damage the turf, although some types leave piles of soil outside the holes. Digger bees are solitary and each bee has its own special entry to its private chamber. However, there may be an entire community of bees, and a whole lot of holes.

The bees, which hang around only for a few weeks in early spring, are beneficial because they pollinate plants and prey on harmful insects. You should be able to work in your yard or mow your grass without being bothered.

If digger bees are a problem, try to avoid insecticides. Watering the ground well in early spring may keep them from digging in your lawn. If the bees are in your vegetable garden or flower beds, a thick layer of mulch may discourage them.

Digger bees are ¼ to ½ inch (6 mm. to 1 cm.) long. Depending on the species, they may be dark or shiny metallic, often with yellow, white, or rust-colored markings. The females are very fuzzy, which allows them to carry pollen on their bodies.

Digger bees generally don’t sting unless they’re threatened. They aren’t aggressive and they won’t attack like wasps or yellowjackets. However, people who are allergic to bee stings should be careful. Also, be sure you’re dealing with digger bees and not bumblebees or wasps, which can be dangerous when disturbed.