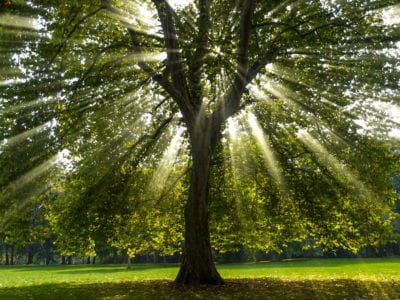 Summers can be hot in the Heartland of the U.S., and shade trees are a place of refuge from unrelenting heat and blazing sun. Selecting northern plains shade trees starts with deciding if you want evergreen or deciduous, fruit, size, and other considerations.

Shade trees in the Rockies also need to be vigorous and hardy to survive the see-saw of weather conditions and temperatures. Some suggestions might help get you started on the shady retreat of your dreams.

Before you purchase and plant a tree, evaluate your soil and drainage conditions. Make sure you know your individual hardiness rating, as microclimates across the region vary. West North Central shade trees need to be cold hardy; otherwise, they may be plagued by winter die-back or worse. Each species is different in a genus and not all are able to survive the cold.

No matter what size tree you want or its individual attributes, the easiest trees to grow are always native. That doesn’t mean you can’t have a shade tree that is from another region, it just means you will have to give that transplant more care and it will be more prone to disease or pest problems. This is where cultivars come in.

If you want to enjoy a native plant but need a variety suited for your compact soil, producing a different color of flowers or other traits, there is probably an option for you. Plant researchers are breeding new cultivars all the time and the variety within a species is now astounding.

Deciduous trees provide some of the most beautiful fall colors. While they may lack foliage in the cold season, they more than make up for it while the leaves are still around. The tree’s outstretched branches maximize the area that gets shade, and many have fruits, flowers, or other special characteristics.

Winter can get a little bleak when all the flowers are gone, the vegetable garden has died back, and leaves have left the trees. Evergreen shade trees for West North Central regions add a bit of color and life while everything else is hibernating.

Printer Friendly Version
Read more about West North Central/Rockies
<PreviousNext>
Did you find this helpful? Share it with your friends!
FacebookTweetPinEmail
Related Articles
Newest Articles
You might also like…
Additional Help & Information