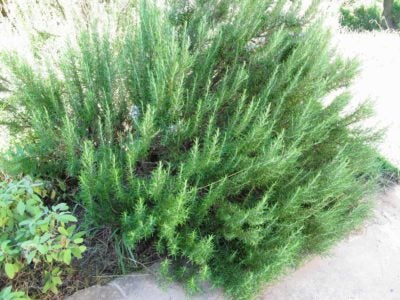 Rosemary is traditionally a warm climate plant, but agronomists have been busy developing cold hardy rosemary cultivars suitable for growing in cold northern climates. Keep in mind that even hardy rosemary plants benefit from ample winter protection, as temperatures in zone 5 may drop as low as -20 degrees F. (-29 C.).

Alcalde (Rosemarinus officinalis ‘Alcalde Cold Hardy’) – This cold hardy rosemary is rated for zones 6 through 9, but it may survive the upper ranges of zone 5 with adequate protection. If you’re in doubt, plant Alcalde in a pot and bring it indoors in autumn. Alcalde is an upright plant with thick, olive-green foliage. The blooms, which appear from early summer to fall, are an attractive shade of pale blue.

Arp Rosemary (Rosemarinus officinalis ‘Arp’) – While Arp is a very cold hardy rosemary, it may struggle outdoors in zone 5. Winter protection is critical, but if you want to eliminate all doubt, bring the plant indoors for the winter. Arp rosemary, a tall variety that reaches heights of 36 to 48 inches (91-122 cm.), displays clear blue flowers in late spring and early summer.

The most important aspect of growing rosemary plants in cooler climates is to provide adequate winter care. These tips should help:

Cut the rosemary plant within a couple of inches (5 cm.) from the ground after the first hard frost.

Cover the remaining plant completely with 4 to 6 inches (10-15 cm.) of mulch. (Remove most of the mulch when new growth appears in spring, leaving only about 2 inches (5 cm.) in place.)

If you live in a very cold climate, consider covering the plant with extra protection such as a frost blanket to protect the plant from frost heaving.

Don’t overwater. Rosemary doesn’t like wet feet, and damp soil in winter places the plant at a higher risk of damage.

If you choose to bring rosemary indoors during the winter, provide a brightly lit spot where temperatures remain about 63 to 65 degrees F. (17-18 C.).

Tip for growing rosemary in cold climates: Take cuttings from your rosemary plant in spring, or after the flower has finished blooming in late summer. That way, you’ll replace plants that may be lost during the winter.