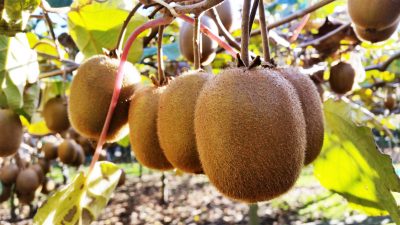 Kiwi is not only delicious, but nutritious, with more vitamin C than oranges, more potassium than bananas, and a healthy dose of folate, copper, fiber, vitamin E, and lutein. For USDA zone 7 or above dwellers, there are several kiwi plants suited to your zones. These types of kiwis are referred to as fuzzy kiwi, but there are also hardy kiwi fruit varieties that also make suitable zone 7 kiwi vines. Interested in growing your own kiwis in zone 7? Read on to find out about zone 7 kiwi vines.

About Kiwi Plants for Zone 7

Today, kiwi fruit is available at almost every grocery store, but when I was growing up kiwis were a rare commodity, something exotic that we assumed must come from a far-off tropical land. For the longest time, this made me think that I would be unable to grow kiwi fruit, but the fact is that kiwi fruit is native to southeast Asia and can be grown in any climate that has at least a month of 45 degrees F. (7 C.) temperatures in winter.

As mentioned, there are two types of kiwis: fuzzy and hardy. The familiar green, fuzzy kiwi (Actinidia deliciosa) found at the grocers has a tart flavor and is hardy to USDA zones 7 to 9, so it best grown on the West Coast or southern regions of the U.S. It ripens a month earlier than other fuzzy kiwi types and bears fruit a year earlier. It is partially self-fruitful, meaning that some fruit will be produced with one plant, but an even larger harvest can be had if there are several plants. Cultivars include Blake, Elmwood, and Hayward.

Hardy kiwi fruit varieties are less likely to be found at the market because the fruit doesn’t ship well, but they do make wonderful fruiting vines for the garden. The hardy varieties also produce smaller fruit than fuzzy kiwi but with sweeter flesh. A. kolomikta is the most cold hardy and is suited down to USDA zone 3. ‘Arctic Beauty’ is an example of this kiwi that is especially pretty with male plants splashed with pink and white.

A. purpurea has red skin and flesh and is hardy to zone 5 and 6. ‘Ken’s Red’ is one of this variety’s cultivars with cherry sized fruit that is both sweet and tart. A. arguta ‘Anna’ can be grown in USDA zones 5 and 6 and A. chinensis is a newcomer that has very sweet, yellow flesh.

Keep in mind that kiwi vines are dioecious; that is, they require a male and female for pollination. A one-to-one ratio is fine or one male plant for every six female plants.

A. arguta ‘Issai’ is one of the only self-fruitful varieties of hardy kiwi and is hardy to zone 5. It bears within the first year of planting. It is a smaller vine perfect for container growing, although its fruit is smaller than other hardy kiwi and it is susceptible to spider mites when grown in hot, dry climates.

Plant kiwi in full sun or in part shade for hardy kiwi. Kiwi plants bloom early and are easily damaged by spring frosts. Situate the plants on a mildly sloped area that will protect the plants from winter winds and allow for good drainage and irrigation. Avoid planting in heavy, wet clay that tends to foster root rot on kiwi vines.

Loosen the soil and amend with compost prior to planting. If your soil is really bad, mix in a slow-release organic fertilizer. Space female plants 15 feet (5 m.) apart and male plants within 50 feet (15 m.) of the females.