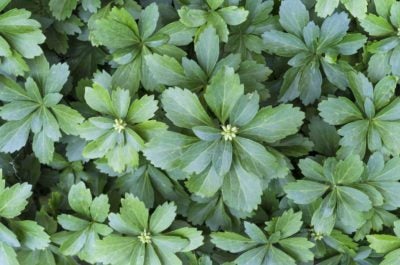 Evergreen groundcovers are just the ticket if you’ve got a difficult spot where nothing else will grow, where soil erosion is causing problems, or if you’re simply in the market for a beautiful, low-maintenance plant. Selecting evergreen groundcover plants for zone 9 isn’t difficult, although zone 9 evergreen groundcovers must be sturdy enough to withstand the climate’s hot summers. Read on for five suggestions that are bound to pique your interest.

Interested in growing zone 9 evergreen groundcovers? The following plants are certain to thrive in your region and provide year-round coverage:

Beach morning glory – Also known as bayhops or railroad vine (Ipomoea pes-caprae), this is among the most prolific creeping evergreen plants for zone 9. The plant, which grows in a variety of difficult conditions, produces bright pink blooms sporadically all year long. Although the vine is a native plant and isn’t considered invasive, beach morning glory is a fast-growing plant that requires plenty of room to spread.

Pachysandra – Pachysandra (Pachysandra terminalis) is an evergreen groundcover that thrives in shade – even bare, ugly spots under pines or other evergreen trees. Also known as Japanese spurge, pachysandra is a fast-growing plant that will spread to form an attractive green blanket relatively quickly.

Japanese ardisia – Also known as marlberry, Japanese ardisia (Ardisia japonica) is a low-growing shrub marked by glossy, leathery leaves. Small, pale pink or white flowers appear in mid to late summer, soon followed by shiny red berries that soon ripen to black. This is an excellent choice for full or partial shade but be sure to give it plenty of space. (Note: Beware of coral ardisia (Ardisia crenata), which is considered invasive in certain areas.)

Wedelia – Wedelia (Wedelia trilobata) is an attractive low-growing plant that produces mats of foliage topped by masses of yellow-orange, marigold-like blooms. This adaptable plant tolerates full sun or partial shade and nearly any well-drained soil. Although the plant is an attractive and effective groundcover, it is considered an aggressive nuisance in some areas. Check with your local cooperative extension office for more information about invasiveness potential.

Liriope – Also known as lilyturf, liriope (Liriope muscari) is a grassy, low-maintenance plant that grows in moist soil and conditions ranging from partial shade to full sunlight. The plant, which produces spikes of showy lavender-purple blooms in late summer and early autumn, is available with either green or variegated foliage.