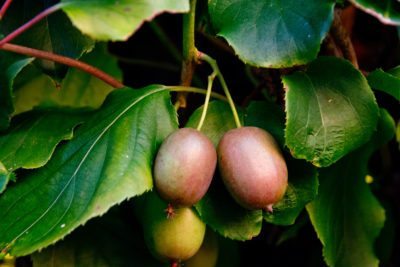 Until fairly recently, kiwi was considered an exotic, difficult to obtain, and special-occasions-only fruit, with a price per pound to match. No doubt this was because kiwi fruit was imported from such far-off lands as New Zealand, Chile, and Italy. Did you know that if you crave kiwi and live in USDA zones 7 through 9, though, you can grow your own? In fact, growing kiwis in zone 9 is quite easy, especially if you select kiwi vines suited for zone 9. Read on to find out about growing kiwi vines in zone 9 and additional information about zone 9 kiwi plants.

About Kiwi Vines in Zone 9

Kiwi (Actinidia deliciosa) is a fast-growing deciduous vine that can grow 30 feet (9 m.) or more. The leaves of the vine are rounded with reddish hairs on the leaf veins and petiole. The vine blooms creamy white blossoms in midspring on one year old wood.

Kiwi is dioecious, meaning plants are either male or female. This means that in order to set fruit, you need both a male and female kiwi in close proximity for most cultivars.

Kiwi also needs a period of about 200 to 225 days to ripen their fruit, making growing kiwis in zone 9 a match made in heaven. In fact, it may come as a surprise, but kiwis thrive in almost any climate that has at least one month of temperatures below 45 degrees F. (7 C.) in the winter.

As mentioned, kiwi, also called Chinese gooseberry, available at the grocers is almost exclusively A. deliciosa, a native of New Zealand. This semi-tropical vine will grow in zones 7 through 9 and varieties include Blake, Elmwood, and Hayward.

Another type of kiwi suited for zone 9 is the fuzzy kiwi, or A. chinensis. You will need both male and female plants to get fruit, although only the female sets fruit. Again, A. chinensis is suited to zones 7 to 9. It produces a medium sized fuzzy kiwi. Pair two low chill varieties, those that only require 200 chill hours, such as ‘Vincent’ (female) with ‘Tomuri’ (male) for pollination.

Lastly, the hardy kiwifruit (A. arguta) native to Japan, Korea, northern China, and Russian Siberia can also be planted in zone 9. This type of kiwi is lacking the fuzz of other varieties. It is similar to A. deliciosa in both taste and appearance, albeit a bit smaller.

One of the most common varieties of A. arguta is ‘Issai,’ one of the few self-pollinating varieties of kiwi. This early fruiting kiwi will produce fruit on one year old vines. It bears small fruit, about the size of berries or large grapes, that are exceptionally sweet with around 20% sugar content. ‘Issai’ tolerates heat and humidity, is hardy, and disease resistant. It prefers full sun but will tolerate partial shade. Plant this kiwi in rich, loamy soil that is well-draining.