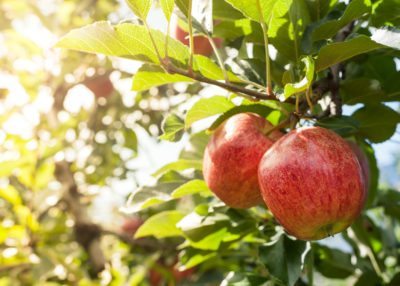 Apple trees (Malus domestica) have a chilling requirement. This refers to the amount of time they must be exposed to cold temperatures in the winter in order to produce fruit. While the chilling requirements of most apple cultivars make them unlikely to grow in warmer regions, you’ll find some low chill apple trees. These are the appropriate apple varieties for zone 9. Read on for information and tips for growing apples in zone 9.

Most apple trees require a certain number of “chill units.” These are the cumulative hours that winter temperatures drop to 32 to 45 degrees F. (0-7 C.) during the winter.

Since U.S. Department of Agriculture plant hardiness zone 9 has relatively mild winters, only those apple trees requiring a lesser number of chill units can thrive there. Remember that a hardiness zone is based on the lowest annual temperatures in a region. This does not necessarily correlate with chill hours.

Zone 9 average minimum temperatures range from 20 to 30 degrees F. (-7 to -1 C.). You know that a zone 9 area is likely to have some hours in the chill unit temperature range, but the number will differ from place to place within the zone.

You need to ask your university extension or garden store about the number of chill hours in your area. Whatever that number, you are likely to find low chill apple trees that will work perfectly as your zone 9 apple trees.

When you want to start growing apples in zone 9, look for the low chill apple trees available in your own favorite garden store. You should find more than a few apple varieties for zone 9. With your area’s chill hours in mind, check out these cultivars as potential apple trees for zone 9: “Anna,’ ‘Dorsett Golden,’ and ‘Tropic Sweet’ are all cultivars with a chilling requirement of only 250 to 300 hours.

Other possible apple trees for zone 9 include ‘Ein Shemer,’ which apple experts say needs no chill at all. Its apples are small and flavorful. Old-fashioned varieties grown as zone 9 apple trees in yesteryear include ‘Pettingill,’ ‘Yellow Bellflower,’ ‘Winter Banana,’ and ‘White Winter Pearmain.’