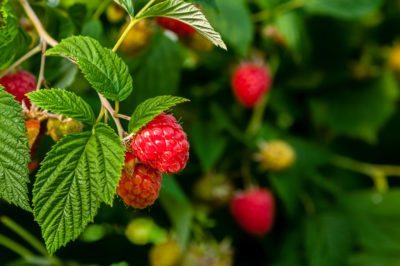 In general, raspberries are hardy in zones 3 to 9. However, different types and cultivars are better suited for different areas. Red and yellow raspberries tend to be more cold tolerant, while black and purple raspberries can die out in areas with extremely cold winters. Red raspberries fall into two categories: Summer bearing or Everbearing. In zone 9, the canes of everbearing raspberries can be left on the plant to overwinter and produce a second set of fruit in early spring. After producing fruit, these canes are pruned back.

When growing raspberries in zone 9, select a site in full sun with moist, but well-draining soil. Zone 9 raspberry plants will struggle in locations with high winds.

Also, it is important not to plant raspberries where tomatoes, eggplant, potatoes, roses, or peppers have previously been planted in the last three to five years, as these plants can leave diseases in the soil that raspberries are specifically susceptible to.

Below are suitable raspberry plants for zone 9: