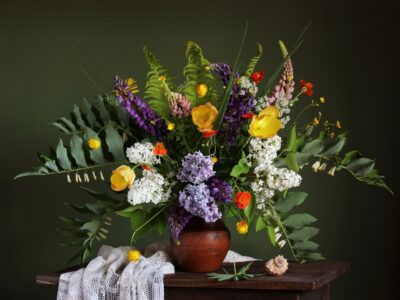 Floral arranging has changed throughout time without a doubt. Over the decades, trends have fluctuated to favor the use of certain types of flowers and/or styles. Though the art of cut flowers can vary greatly by occasion and period, several types of arrangements have withstood the test of time. Many of these floral styles link directly back to the Victorian era. Learning more about these specific practices is an interesting study in how many modern-day techniques came to be.

As an immense interest in botany became popularized in the Victorian period, so did an increased fascination of flowers and the art of arranging them. The Victorian era is frequently associated with lavish, ornate design, and it makes sense that Victorian era floral arrangements demonstrated much of the same intricacy. In examining the Victorian tradition of flowers further, one will find that both bouquets and arrangements were an important aspect of social culture. It was not uncommon or both men and women to adorn themselves with flowers in attendance at parties and other special events.

Boutonnieres and small hand-held bouquets were among the most common Victorian accessories. Frequently, women would carry small nosegays with them, which were arranged in a bouquet holder. Most of these bouquet holders were made of brass or another metal and highly decorated with jewels or detailed work. The bottom of the holder often contained a small vessel for water or some type of moistened medium to make certain that the flowers remained fresh. Most of these “Porte-bouquets” would then be attached to the dress or another garment via a pin and eyehole attached to the end of the holder.

When it came to Victorian romance, bouquets were given frequently by suitors as a means to convey their love. In turn, the bouquets would be worn as a means to show their returned interest and affection towards the sender. The Victorian era also gave way to much of the meaning and symbolism related to flowers that many of us still value today.

Though most blooms today are considered to have a positive connotation, people living in the Victorian era used a very detailed “language” which depended greatly upon the type of flower used. This “language of flowers,” also known as floriography, allowed people to further express their true emotions and better convey their feelings for others. Interestingly, the presentation of certain types of flowers have even been used to display disdain, distrust, and other negative emotions.

Victorian wedding bouquets were among the most meaningful arrangements during the period. Just as other bouquets had conveyed special meaning, each stem used in wedding décor had a very special significance. The floral arrangements and bouquets used in Queen Victoria’s own wedding are believed to have popularized the use of meaningful flower décor even further. Among the most commonly used blooms were orange blossom and myrtle. At the time, orange blossoms were believed to be a symbol of both innocence and purity. Likewise, myrtle stems were to acknowledge the bride and groom’s hopes of good luck and a happy marriage.