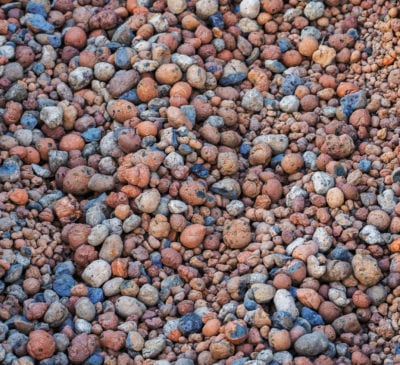 What is Expanded Shale?

Shale is the most common sedimentary rock. It is a find-grained rock made up of mud comprised of flakes of clay and other minerals such as quartz and calcite. The resulting rock breaks readily into thin layers called fissility.

Expanded shale is found in areas like Texas 10-15 feet (3 to 4.5 meters) below the soil surface. It was formed during the Cretaceous period when Texas was a huge lakebed. The lakebed sediments hardened under pressure to form the shale.

Expanded shale is formed when the shale is crushed and fired in a rotary kiln at 2,000 F. (1,093 C.). This process causes tiny air spaces in the shale to expand. The resulting product is called expanded or vitrified shale.

This product is a lightweight, gray, porous gravel related to the silicate soil amendments perlite and vermiculite. Adding it to heavy clay soil lightens and aerates the soil. Expanded shale also holds 40% of its weight in water, allowing for better water retention around plants.

Unlike organic amendments, expanded shale doesn’t break down so soil stays loose and friable for years.

Expanded shale can be used to lighten heavy clay soil, but that isn’t the extent of its use. It has been incorporated into lightweight aggregates that are mixed into concrete instead of heavy sand or gravel and used in construction.

It has been used in the designs for rooftop gardens and green roofs, which allows plant life to be supported at half the weight of soil.

Expanded shale has been used under turf grass on golf courses and ball fields, in aquaponic and hydroponic systems, as a heat shielding ground cover and biofilter in water gardens and retention ponds.

How to Use Expanded Shale in the Garden

Expanded shale is used by orchid and bonsai enthusiasts to create lightweight, aerating, water retentive potting soils. It can be used with other containerized plants as well. Put a third of the shale in the bottom of the pot and then mix the shale with potting soil 50-50 for the rest of the container.

To lighten heavy clay soil, lay a 3-inch (7.5 cm.) layer of expanded shale on top of the soil area to be worked; till it in 6-8 inches (15-20 cm.) deep. At the same time, till in 3 inches of plant-based compost, which will result in a 6-inch (15 cm.) raised bed with greatly improved friability, nutrient content, and moisture retention.