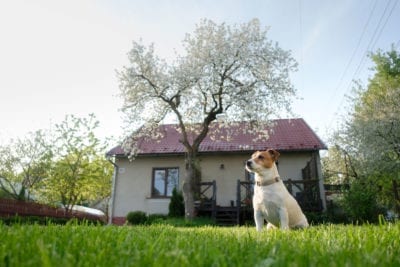 Everybody poops. Everybody, and that includes Fido. The difference between Fido and you is that Fido may, and probably does, think it’s perfectly okay to defecate in the garden. Given that pets have a natural disregard for the sanctity of your tomatoes, how do you go about sanitizing garden soil?

If there are pet feces in the garden, is disinfecting contaminated soil even necessary? After all, many gardeners add manure to the soil, so what is different about dog poop in soil?

Cat or Dog Poop in Soil

Yes, many gardeners amend their soil with nutrient-rich manure, but the difference between putting pet feces in the garden and spreading some steer manure is huge. Manures used in gardens are either treated so they are pathogen-free (sterile) or have been composted and heated to kill off any pathogens.

Also, most people don’t (or shouldn’t) use fresh animal feces in the garden: dogs or otherwise. Fresh steer or pet feces in the garden contains any number of pathogens. In the case of fresh cat or dog poop in soil, parasitic pathogens and roundworms that can transfer to humans are very much in evidence.

So, while all this points to the need for sanitizing garden soil, if it has been used as a potty by your pets, is it really necessary to sterilize soil for planting, and should you plant anything at all?

Whether or not to sterilize soil for planting is rather a matter of how long ago the pets were using the garden as a bathroom. If, for instance, you have moved into a home where the previous owner was known to have dogs, it would be a good idea to remove any remaining pet feces from the garden and then allow it to lay fallow for a growing season just to be sure any nasty bugs have been killed off.

If you know that it has been years since pets were allowed to use the garden as a restroom, there should be no need to sterilize soil for planting. In that time frame, any pathogens should have broken down.

The National Institute for Health and Center for Disease Control state that animal manure should not be applied sooner than 90 days to harvest for above-ground crops and 120 days for root crops because disease pathogens do not live longer in soils during these time frames. Of course, they are probably talking about steer or chicken manure, but the advice still holds true for gardens that are contaminated by pet poop.

The first thing to do when sanitizing garden soil due to pet excrement is to remove the poop.  This seems elemental, but I cannot tell you how many people don’t scoop their pets’ poop.

Next, plant cover crops, such as bluegrass or red clover, and allow to grow for a season. If you choose not to grow a cover crop, then at least allow the soil to remain fallow for a year. You may also wish to cover the garden area with black plastic, which will become super-heated during the heat of the summer and kill off any nasty bacterium.

If you are still worried about the safety of the soil, plant crops with big root systems (tomatoes, beans, squash, cucumbers) and avoid planting leafy greens, like lettuce and mustard.

Lastly, before eating it, always wash your produce.