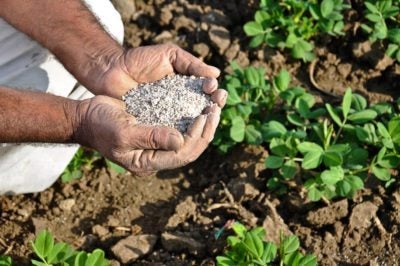 Side Dressing with Sulfur – Why?

Sulfur is a secondary nutrient, until your plants are deficient. This is when it becomes important and can be added like a primary nutrient, using a technique like side dressing. One big reason to side dress with sulfur is that because a deficiency in this nutrient will reduce a plant’s ability to take up the primary nutrients’ nitrogen, phosphorus, and potassium.

Sulfur deficiency is becoming a bigger problem, although the signs of it are not easy to see. A big reason for this is that energy is becoming cleaner and there are fewer sulfur compounds entering the air from power plants. Farmers in the Midwest U.S., in particular, are using sulfur side dressing more and more because of this new deficiency caused by reduced emissions.

How to Side Dress Plants with Sulfur

Side dressing with sulfur is easy. The strategy is a simple one and is just like the name sounds: you add a line of the chosen fertilizer alongside the stem of the plant or plants in question. Put down a line of fertilizer along each side of the stem of a plant, a few inches (8 cm.) away, and then gently water it to allow the minerals to seep into the soil.

When to Side Dress with Sulfur in the Garden

You can side dress with sulfur at any time you think your plants need the nutrient, but a good time to do it is in the spring when using sulfate fertilizers. You can find fertilizers for sulfur in its elemental form or in its sulfate form, but the latter is the form in which your plants will use it, so it makes a good choice for spring feedings.

Elemental sulfur can also be problematic because it has to be used as a finely ground powder that is difficult to apply, sticks to clothing and skin, and is not water soluble. Another good choice is a nitrogen and sulfate combination fertilizer. It is often the case that a plant deficient in one is also deficient in the other nutrient.