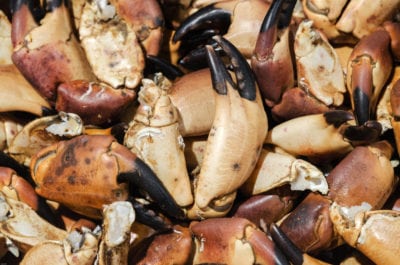 Gardener’s know that amending the soil with good organic compost is the key to healthy plants that produce prodigious yields. Those who live near the ocean have long known about the benefits of using shellfish for fertilizer. Fertilizing with shellfish is not only a sustainable method for utilizing the otherwise useless parts (shells) of crustaceans, but also imparts nutrients into the soil. What exactly is shellfish fertilizer? Read on to find out about fertilizer made of shellfish.

What is Shellfish Fertilizer?

Fertilizer made of shellfish is composed of the shells of crustaceans such as crabs, shrimp, or even lobsters and is also called shrimp or crab meal. The shells, which are rich in nitrogen, are mixed with coarse carbon rich material such as wood shavings or chips, leaves, branches, and bark.

This is allowed to compost over the course of several months while microorganisms feast on the proteins and sugars, effectively converting the pile into rich humus. As the microorganisms feed on the shellfish proteins, they generate plenty of heat, which reduces pathogens, thus eliminating any nasty, fishy odor and at the same time killing any weed seeds.

Crab meal is readily available online and at many nurseries or, if you have access to significant amounts of shellfish material, you can compost the shells yourself.

Shellfish fertilizer contains about 12% nitrogen along with many trace minerals. Fertilizing with shellfish allows for a slow release of not only nitrogen but also of calcium, phosphorus, and magnesium. It is also rich in chitin that encourages healthy populations of organisms that deter pest nematodes. Plus, earthworms love it.

Apply shellfish fertilizer several weeks prior to planting the garden. Broadcast 10 pounds (4.5 kg.) per 100 square feet (9 sq. m.) and then rake it into the top 4 to 6 inches (10-15 cm.) of soil. It can also be worked into individual planting holes as you transplant or sow seeds.

Crab meal can help deter not only slugs and snails, but ants and grubs as well. This organic fertilizer doesn’t burn plants like some other fertilizers because it is slow release. It is safe to use near water systems since the nitrogen doesn’t leach out of the soil and into water runoff.

When shellfish fertilizer is tilled or dug in well, it helps plants fight off root rot, blight, and powdery mildew while encouraging healthy populations of microorganisms and earthworms. Also, because the muscle proteins in shellfish (tropomyosin), which cause allergies, are eaten by microorganisms as they compost down, there is no danger to people with shellfish allergies.

Really, all in all, it is an excellent organic fertilizer option, one that in the past would have been just been dumped back into the sea with the potential to overload the ecosystem.