Using Soil In Gardens: Difference Between Topsoil And Potting Soil 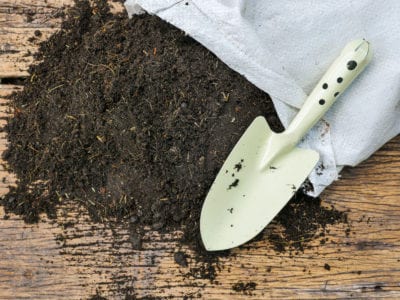 You may think that dirt is dirt. But if you’d like your plants to have the best chance to grow and thrive, you’ll need to choose the right type of soil depending on where your flowers and vegetables are growing. Just like in real estate, when it comes to topsoil vs. potting soil, it’s all about location, location, location. The difference between topsoil and potting soil is in the ingredients, and each one is designed for a different use.

When looking into what is potting soil and what is topsoil, you’ll find that they have very little in common. In fact, potting soil may have no actual soil in it at all. It needs to drain well while staying aerated, and each manufacturer has its own special blend. Ingredients such as sphagnum moss, coir or coconut husks, bark, and vermiculite are mixed together to give a texture that holds growing roots, delivering food and moisture while allowing the proper drainage required for potted plants.

Topsoil, on the other hand, has no specific ingredients and can be the scraped top from weedy fields or other natural spaces mixed with sand, compost, manure, and a number of other ingredients. It doesn’t work well by itself, and is meant to be more of a soil conditioner than an actual planting medium.

Best Soil for Containers and Gardens

Potting soil is the best soil for containers as it gives the right texture and moisture retention for growing plants in a small space. Some potting soils are specially formulated for specific plants such as African violets or orchids, but every container plant should be grown in some form of potting soil. It’s sterilized, which eliminates any chances of fungus or other organisms being spread to the plants, as well as free of weed seeds and other impurities. It also will not compact like topsoil or plain garden soil in container, which allows for better root growth of container plants.

When looking at soil in gardens, your best option is to improve the soil you have rather than to remove and replace the existing dirt. Topsoil should be mixed in a 50/50 mixture with the dirt that’s already sitting on your land. Each type of soil allows water to drain at a different rate, and mixing the two soils allows moisture to drain through both layers instead of pooling between the two. Use topsoil to condition your garden plot, adding drainage and some organic matter to improve the garden’s general growing condition.