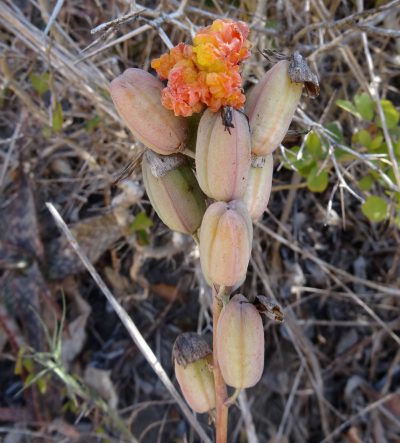 So your aloe plant looks like aliens have invaded the tissue and colonized it? The root cause is not a disease but is actually a tiny insect. Galling on aloe plants is caused by aloe mites, insects so tiny you can’t see them without a magnifying glass. Their activity causes aloe vera plant distortion in the leaves. The warty bumps can occur in just a few spots or in an entire leaf, contorting it into a caricature of its former lovely self. The distorted aloe leaves alone won’t kill the plant but definitely destroys the natural beauty. Learn how to spot the mites and what to do about the problem.

What is Wrong with My Aloe Plant?

Aloe vera plant distortion on the leaves and stems is caused by a little rascal called an eriophyid mite. These almost microscopic insects reproduce rapidly and travel by wind, water, insects, birds, and even people. Once the plant has the insects, it is possible aloe mites can infest other similar plants. Interestingly, it is not their tunneling activity that causes the distorted aloe leaves but the injection of a potent toxin that changes leaf and plant cell structures.

The good news is that the rather alarming and creepy galls on an aloe will not kill the plant. The bad news is in the difficulty of removing the aloe mite. First, it will be helpful to understand more about these creatures as you plan an attack strategy.

Aloe mites are less than 1/100 of an inch (0.25 mm.) in size. The bumpy growths they produce are the result of the saliva they inject into plant tissue during feeding. It has been described as a plant growth regulator with the power of the weed killer 2,4-D. The saliva causes plant cells to grow abnormally, producing blister-like fleshy appendages and distorted growth on aloe. Inside the blister is a little mite, peacefully feeding in its home. Aloe mites overwinter in the plant and start to feed in spring.

The distorted leaves on aloe have a very typical appearance. The flesh of the leaf becomes swollen, contorted and has strange bubble-like swellings. Many of the galls will be green tinged with a flesh colored pink. In large populations, the number of galls can appear to overlap each other. Adding to the effect, spindles or nipples grow out of the affected area. Leaves become twisted, foliar growth is retarded and the entire effect is unappealing.

Luckily, even large populations of mites will probably not affect the aloe’s health severely. The worst damage is cosmetic and can be dealt with in several ways.

The simplest method if you just have one or two distorted aloe leaves is to simply cut them off and discard the infected material. Use clean, sharp cutting implements when doing this and allow the cut to callus over naturally.

If the plant seems to be overrun and the number of galls is vast, there are a couple of other options. Apply insecticide in spring as a root drench so it can be taken in systemically. Carbaryl, Orthene and Dimethoate may be able to control the mite population. Topical applications cannot get to the mites inside their galls, so systemic application is necessary.

In the worst case scenario, if all leaves are affected and the plant material can’t be removed without hurting the plant, either decide to live with mite damage or bag the plant and throw it out.

Distorted leaves on aloe aren’t a death sentence, but such a high population could transfer to your other plants and cause even more damage.