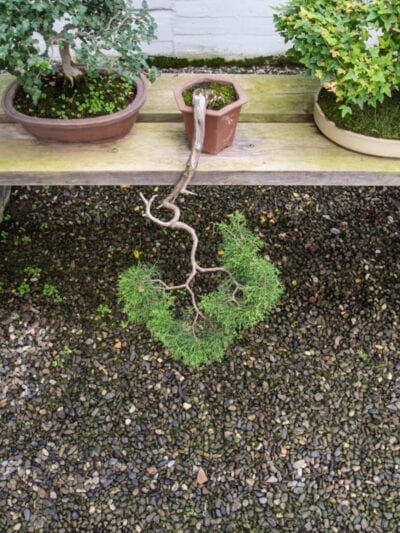 The ancient practice of bonsai lifts pruning to an art form. The pruning techniques for bonsai not only reduce the size of the plant but strive to mimic the natural forms of the trees that grew in the mountainous, harsh regions where bonsai originated.

Creating a cascade bonsai is intended to reflect the shape of a tree that has had a difficult time, yet perseveres. It is best to imagine a shape that was formed due to the crushing weight of heavy winter snows, land slides, or mud slides. These natural catastrophes will twist the tree downward in nature and so it is with a bonsai in the cascade form.

The main trunk of a bonsai in a cascade form will bend downward, past the lip of its container and past its root line. The branches on the main trunk will reach both out and up, as though it were striving for the sun.

In Japanese, a cascade bonsai form is called a kengai bonsai.

When creating natural looking cascading bonsais, it may help to practice these tips for shaping a cascade bonsai form.

Eventually, you will be able to remove the wires and your tree will reflect that persevering force of nature even in the face of adversity.

While these are some of the more popular trees for creating a cascade bonsai, they aren’t the only ones. Any pine or juniper does well for this style of bonsai. Other trees can be used for this style as well, as long as they do not grow vigorously upwards.

Printer Friendly Version
Read more about Bonsai
<PreviousNext>
Did you find this helpful? Share it with your friends!
FacebookTweetPinEmail
Related Articles
Newest Articles
You might also like…
Additional Help & Information