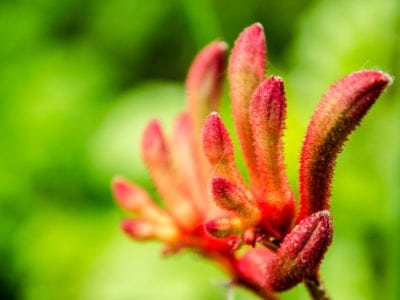 Growing kangaroo paws can be a rewarding endeavor for the home gardener due to their brilliant colors and exotic form with flowers resembling, yes, a kangaroo paw. If you’re interested in knowing what a kangaroo paw needs to live in your home, keep reading to learn more about the exciting kangaroo paws plant.

Occurring naturally in southwest Australia, kangaroo paws belong to the genus Anigozanthos, of which there are eleven species – Anigozanthos flavidus being the most commonly grown. Size, stalk height, and color of kangaroo paws are dictated by the different species, and arise as a result of hybridization. Kangaroo paws are moderately growing specimens commonly used for cut flowers, and are exported all over the world from commercial growing sites such as the USA, Israel, and Japan.

Kangaroo paws’ bloom color is influenced by the fine hairs surrounding the flower (and on occasion the stalk), ranging from black to yellow, orange and red. Spring and summer bloomers outdoors, kangaroo paws may bloom anytime when grown indoors.

Pollinated by birds, the long flower stalks rise above the foliage and act as a red flag, attracting the birds to the nectar and providing them with a perch. Kangaroo paws’ pollen-laden anthers allow pollen to be deposited on the feeding birds and thus, transferred from flower to flower as the birds feed.

How to Plant Kangaroo Paws

Kangaroo paws do well in a variety of habitats and soil types, but prefer well drained, slightly acidic soil in sun exposures. Kangaroo paws work well in containers or as accent plants in borders during summer months.

Also known as cat’s paw and Australian sword lily, growing kangaroo paws spread from rhizomes. Propagation of kangaroo paws then can be accomplished via spring division or by sowing ripened seeds.

There is limited care for kangaroo paws with regards to pests, as they are resistant to most insect marauders. When grown as indoor specimens, however, they may be susceptible to spider mites.

There is a Christmas season plant on the market and its name is the Red and Green kangaroo paw (Anigozanthos manglesii), otherwise marketed as Kanga. Known as the floral emblem of Western Australia, this plant is referred to as reindeer paw in the United States and has unique red and green flower coloration. The cultivar Anigozanthos ‘Bush Emerald’ has similar colored flowers and is generally easier to grow.

Other kangaroo paws worth considering are: