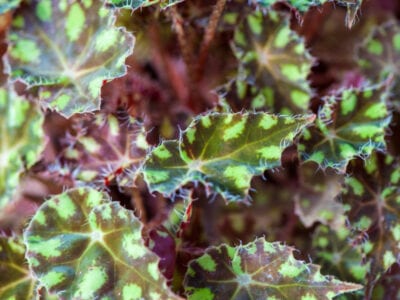 The piggyback plant’s scientific name, Tolmiea menziesii, is derived from its botanical discoverers—Dr. William Fraser Tokmie (1830-1886), a Scottish physician working for the Hudson Bay Company at Fort Vancouver and his colleague, Dr. Archibald Menzies (1754-1842), a naval surgeon by trade and botanist who was a great collector of North American plants.

A novel feature of the piggyback plant is its means of propagation. Its common name may give you a hint. Piggybacks develop buds at the base of each leaf where it meets the leaf stalk (petiole). New plants develop a “piggyback” style off the parent leaf, forcing it to bend under the weight and touch the ground. The new piggyback will then develop roots and become a new separate plant. To propagate at home, simply push a leaf into some soil medium where it will easily root.

When the piggyback is found in its natural habitat, it is an evergreen that prefers moist cool areas protected from overly bright sunlight. This tiny plant, under a foot (31 cm.) in height, is amazingly resilient and does well as a perennial in many zones planted in a shady location. The piggyback plant has an astounding tendency to spread outdoors and soon creates a significant ground covering.

The stems of this plant grow below or just at the surface of the soil. The star-shaped leaves seem to spring from the soil medium. Grown outside, the evergreen leaves tend to become somewhat straggly looking by spring, but new foliage rapidly fills in. The usual piggyback plant has pleasing light green leaves, but the variety Tolmiea Menziesii variagata (Taff’s Gold) has mottled hues of yellow and green creating a mosaic of patterns.

Piggyback blooms are tiny purplish blossoms that flower on tall stalks which shoot up from the foliage. The piggyback does not usually bloom when used as a houseplant but will make lovely dense hanging or potted plants.

How to Care for Piggyback Indoors

Whether using piggyback plants in a hanging basket or pot, place them in an area of indirect bright, moderate, or low light. An east or west exposure is best.

Keep the soil evenly moist. Check daily and water only when necessary. Do not let your piggyback houseplant sit in water.

Fertilize piggyback plants each month between May and September with a liquid fertilizer, following the instructions of the manufacturer. Thereafter, feed the piggyback every six to eight weeks for the remainder of the year.

In May you can move the plant outside for the summer, making sure to bring it back inside in early September. This extremely tolerant plant will survive an array of temperatures, but prefers a temperature above 70 degrees F. (21 C.) during the day and 50 to 60 degrees F. (10-16 C.) at night.

Lastly, while the piggyback can survive almost any condition that would kill most other plants, it’s no match for deer. Deer find the piggyback plant delicious, however, they usually only munch on them when other food is scarce. This is another reason why growing a piggyback plant indoors is preferable.