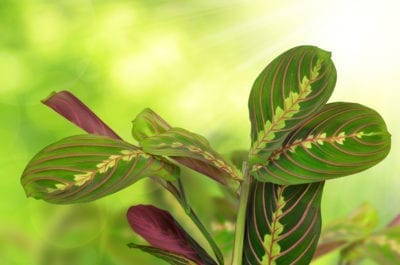 The prayer plant is a fairly common houseplant grown for its stunning colorful leaves. Native to the tropical Americas, primarily South America, the prayer plant grows in the understory of rainforests and is a member of the family Marantaceae. There are anywhere from 40-50 species or types of prayer plant. Of the many varieties of Maranta, only two prayer plant varieties make up the bulk of nursery stock used as houseplants or for other ornamental uses.

Most Maranta varieties have underground rhizomes or tubers with corresponding sets of leaves. Depending upon the variety of Maranta, leaves may be narrow or broad with pinnate veins that run parallel to the midrib. Blooms may be insignificant or spiked and enclosed by bracts.

The most common prayer plant types grown are those of the species Maranta leuconeura, or peacock plant. Commonly grown as a houseplant, this species lacks tubers, has an insignificant bloom, and a low growing vining habit that can be grown as a hanging plant. These types of prayer plant are grown for their colorful, ornamental leaves.

Of the Maranta leuconeura cultivars, two stand out as being the most commonly grown: “Erythroneura” and “Kerchoviana.”

Kerochoviana, also referred to as rabbit’s foot, is a sprawling herbaceous plant with a vining habit. The upper surface of the foliage is variegated and velvety, with patchy brown splotches that turn dark green as the leaf matures. This type of prayer plant is grown as a hanging plant. It may produce some small white blooms, but this is more common when the plant is in its native element.

Kerchoviana Minima is fairly rare. It lacks tuberous roots but does have the swollen stems often seen at the nodes on other Maranta varieties. Leaves are dark green with splotches of light green between the midrib and margin while the underside is purple. It has foliage that is similar to green Maranta except that the surface area is a third the size and the internode length is longer.

Another beautiful prayer plant variety is “Tricolor.” As the name implies, this variety of Maranta has stunning leaves boasting three hues. The leaves are a deep green marked with scarlet colored veins and variegated areas of cream or yellow.

Printer Friendly Version
Read more about Prayer Plants
<PreviousNext>
Did you find this helpful? Share it with your friends!
FacebookTweetPinEmail
Related Articles
Newest Articles
You might also like…
Additional Help & Information