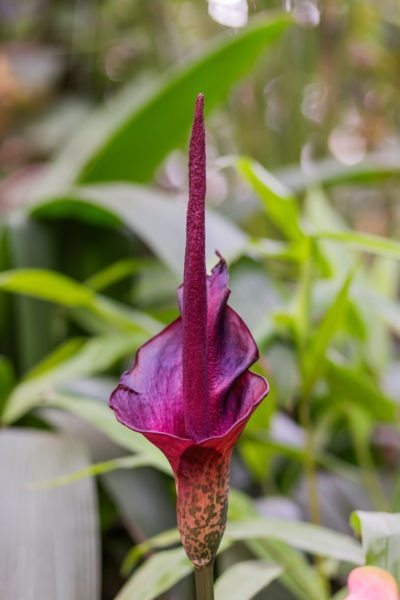 Voodoo lily plants are grown for the gigantic size of the flowers and for the unusual foliage. The flowers produce a strong, offensive odor similar to that of rotting meat. The smell attracts flies that pollinate the flowers. They are not as difficult to grow as their exotic appearance may suggest, however. Learning how to plant a voodoo lily bulb and the subsequent care of voodoo lilies can actually be quite easy.

Voodoo lily, also called Devil’s tongue, is a member of the genus Amorphophallus. The voodoo lily, A. titanum, is the largest flower in the world. A. konjac has smaller flowers, but it is still quite large compared to other garden flowers.

Each bulb produces one stalk, about 6 feet tall (2 m.), topped by one gigantic leaf. After the leaf stalk withers, the voodoo lily bulb produces a flower stalk. The flower is actually a spathe and spadex arrangement similar to a calla lily. The spadex can be 10 to over 50 inches (25.5 cm. to 1.27 m.) long. The blossom only lasts a day or two.

How to Plant a Voodoo Lily

A voodoo lily bulb is up to 10 inches (25.5 cm.) across, round and flattened. Choose bulbs that are at least the size of a softball to get flowers the first year.

You will want to plant the voodoo lily bulb a good distance from your house so that the odor doesn’t become too annoying. Plant the bulb in a location with full or partial shade in spring after the soil has warmed to about 60 degrees Fahrenheit (15.5 C.). Cover it with 5 to 7 inches (13 to 18 cm.) of soil.

Once established, voodoo lilies are relatively carefree. The plant doesn’t need supplemental watering except during prolonged dry spells and never needs fertilizer. Remove the bloom when it fades, but allow the stalk to remain on the voodoo lily bulb until it withers.

Voodoo lily plants are hardy in USDA zones 6 through 10. In cooler zones, you can lift the bulb for indoor storage after the foliage is killed back by frost. The bulb has no special storage requirements. Brush off the soil and set the bulb on a shelf until spring. The problem with bringing it inside is that the bulb will come to flower while indoors and the smell is overpowering.

Voodoo lilies can also be grown in pots. Use a pot that’s 4 inches (10 cm.) in diameter larger than the bulb. Allow the soil to dry out before watering. In zones cooler than 6, bring the potted bulb indoors for winter, but be aware of its unpleasant odor.

Printer Friendly Version
Read more about Voodoo Lilies
Next>
Did you find this helpful? Share it with your friends!
FacebookTweetPinEmail
Related Articles
Newest Articles
You might also like…
Additional Help & Information