Smelly Plants In Gardens: Learn About Common Plants That Stink 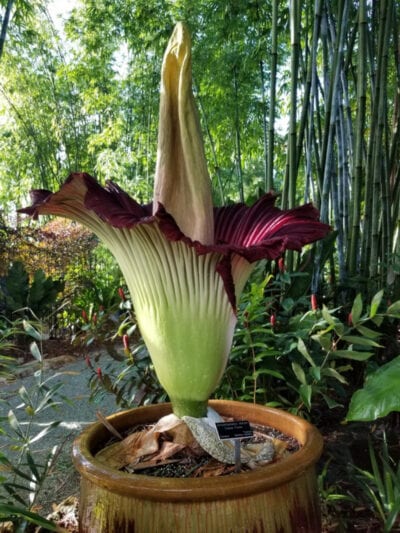 When most people think of plants, they imagine a field full of sweetly scented flowers or a garden of savory herbs. But what about the others – the stinky plants? Although smelly plants in gardens are uncommon, a few that make interesting landscape additions also pack a pungent odor. These common plants that stink aren’t necessarily related, but they do have a common purpose behind that undeniably bad smell.

Why Some Plants Smell Bad

We like to think of butterflies and bees when we think of pollinators – these insects are drawn to sweet smells and often fill up gardens where fragrant flowers abound. The lesser-known pollinators, like flies and beetles, serve an equally important function for a small subset of plants. These plants emit a horrific odor that may smell like rotten meat or feces. They also bear fleshy flowers that may be covered in hair to give the full impression of decaying flesh to their pollinators.

Smelly plants in gardens are less common in America, but for the most part, you have to have invited them in since most grow wild on other continents. A few, like the Dutchman’s pipe, skunk cabbage, corn lilies, and dragon arum may appear from time to time, depending on your location.

The most offensive plants are hardly in widespread cultivation, though many are popular as novelties in greenhouses and subtropical locations. The succulents known as the starfish flower are members of the Milkweed family and may be the most popular choice on the smelly plant list.

The Arum family has produced a few stinkers as well, including the enormous corpse flower. This botanical garden favorite is commonly believed to have the largest flower, but the “flower” is actually a compound flowering stalk and protective cowl. The remarkable thing about corpse flowers isn’t the size of the bloom, but its infrequency – it can take a decade or more for a single flower to appear.

The voodoo lily is a close cousin of the corpse flower and does sometimes appear in catalogs and landscapes. This flower is just as pungent as the corpse flower, so if you decide to plant it make sure it’s away from windows and patios. It’s tempting to show off your stinky garden, but friends and family may not be as botanically accepting as you hoped when you planted these stinkers.