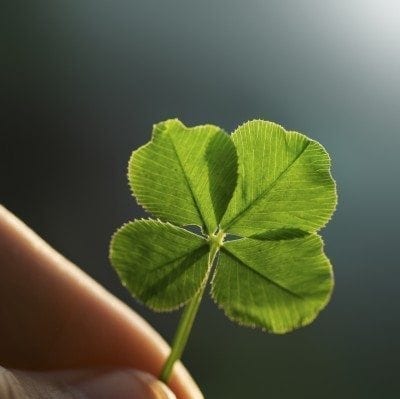 Ah, the four leaf clover… so much to be said about this misfit of nature. Some people look all their lives for that lucky four leaf clover without success, while others (like me and my kids) could find them all day long. But exactly what causes four leaf clovers, why are they considered so lucky, and how do you successfully go about finding four leaf clovers? Read on to find out.

Before you begin your search for that seemingly ‘mystical’ clover specimen, it helps to have a little background info about four leaf clovers. We all know that it is thought to bring good luck to the finder (Yeah right. I find them all the time and if it weren’t for my bad luck, I’d have no luck at all!), but did you know that St. Patrick is said to have used the three-leaf clover to explain the Holy Trinity to the pagan Irish, and the fourth leaf is believed to represent God’s grace.

Additional information points to the four leaves of clover as representing faith, hope, love, and luck. And in the Middle Ages, a clover with four leaves not only meant good luck but was believed to grant one the ability to see fairies (just so you know, I have yet to see one).

The elusive four leaf clover occurs in white clover (Trifolium repens). You know the one. That common weed popping up in yards everywhere and is difficult to control once it’s taken hold. A white clover leaf should, generally, only have three leaflets – which is why the species name is trifolium; ‘tri’ means three. However, many times (more often than you would think) you will come across a clover with four leaves, five leaves (cinquefoil) or even more – my kids have a knack for finding clovers having six or even seven leaves. So why does this happen and how rare is it?

When you’re looking for answers to what causes four leaf clovers, the scientific response is normally, “We aren’t quite sure why it happens.” There are, however, a number of theories.

How to Find a Four Leaf Clover

So if it’s been said that about one out of every 10,000 clovers will have four leaves and nearly 200 clovers are found in a 24-inch (61 cm.) square plot, what does this mean exactly? And what are your chances of finding four leaf clovers? Simply put, in an area roughly 13 square feet (1.2 sq. m.), you should find at least one four-leaf clover.

Like I keep saying, it’s not as difficult as one might think to find a four leaf clover. My secret to success, and apparently others too as I found in my research, is not to look for them at all. If you get down on those hands and knees looking through each individual clover, not only will you end up with back or knee pain but you’ll surely go cross-eyed. Just casually walk around that clover bed instead, perusing the area, and eventually, those four leaf clovers (or five and six leaf ones) will actually begin to ‘stick out’ amongst the more common three leaf clovers.

Feeling lucky yet? Give it a try.