Fairy Gardens – How To Make Your Garden Into A Fairy Sanctuary 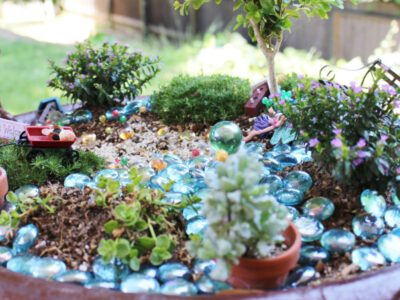 Fairy gardens are becoming increasingly popular in the home garden. For centuries, the world has been fascinated with the idea that “wee folk” live among us and have the power to spread magic and mischief throughout our homes and gardens. While evidence of the existence of fairies is slim, adding fairy gardens to our own gardens is a way of participating in this centuries old tradition of trying to please the spirits and gain their favor.

What are Fairy Gardens?

Before you build your fairy garden, you should give some thought to what kind of fairy garden you would like to build.

One popular idea is to build a woodland fairy garden. These miniature gardens are normally installed at the foot of a tree in a shaded part of the garden and incorporate forest themed items like tree leaves and a door on the trunk of the tree.

Really, fairy garden ideas are only limited by your own imagination. Have fun with it.

Once you have decided on what kind of fairy garden you would like, you need to decide on the design of your fairy garden. A fairy garden can either be installed right into your garden or it can be grown as a container garden. Both fairy garden designs have their advantages.

Many people choose to build their fairy gardens in large containers. This method allows the garden to be moved out of inclement weather and to also be enjoyed from wherever in the garden you choose. The down side of a container fairy garden is that it does not contain quite the same mystique as a fairy garden hidden in your own garden.

However you decide to build your miniature fairy garden, whether it be a woodland fairy garden or a fairy garden of your own imagination, the important thing to remember is that fairy gardens are all about having fun. Get crazy, get silly, just keep it small and I guarantee that the fairies will appreciate (and reward) your efforts.