Crocus Winter Flowering: Learn About Crocus In Snow And Cold 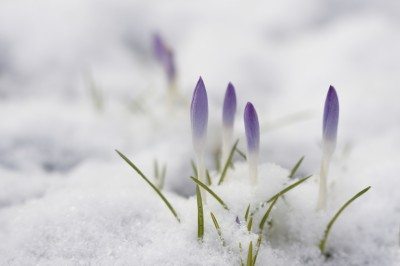 Around February and March, winter house-bound gardeners are roaming their property, searching for signs of renewed plant life. One of the first plants to poke out some foliage and quickly bloom is the crocus. Their cup-shaped flowers signal warmer temperatures and the promise of a bountiful season. Crocus winter flowering happens in temperate regions. It is not uncommon to see their white, yellow, and purple heads surrounded by late snow. Will snow hurt crocus blooms? Read on to learn more.

Spring blooming plants need chilling to force the bulb to sprout. This necessity makes them naturally tolerant of freezes and snow and minimizes the chance of crocus cold damage.

The United States Department of Agriculture has organized the U.S. into hardiness zones. These indicate the average annual minimum temperature per region, divided by 10 degrees Fahrenheit. These bulb plants are hardy in United States Department of Agriculture zones 9 to 5.
Crocus will thrive in zone 9, which is 20 to 30 degrees F. (-6 to -1 C.), and down to zone 5, which ranges from -20 to -10 degrees F. (-28 to -23 C.). That means that when freezing occurs to the ambient air at 32 degrees F. (0 C.), the plant is still within its hardiness zone.

So, will snow hurt crocus blooms? Snow actually acts as an insulator and keeps temperatures around the plant warmer than the ambient air. Crocus in snow and cold are resilient and will continue their life cycle. The foliage is very cold durable and can even persist under a thick blanket of snow. Crocus cold damage in new buds is possible, however, as they are a bit more sensitive. Tough little crocus seems to make it through any spring weather event.

Protecting Crocus in Snow and Cold

If a freak storm is coming through and you are really worried about the plants, cover them with a frost barrier blanket. You can also use plastic, soil barrier, or even cardboard. The idea is to lightly cover the plants to protect them from extreme cold.

Covers also keep the plants from being crushed by heavy snow, although, in most cases, the flowers will spring back up once the heavy white stuff has melted. Since crocus cold hardiness goes down to -20 degrees F. (-28 C.), an incident cold enough to hurt them would be rare and only in the chilliest zones.

Spring cold temperatures do not last long enough to do damage to most bulbs. Some of the other hardy specimens are hyacinth, snowdrops, and some daffodil species. The best thing about crocus is their proximity to the ground, which has been warming gradually in response to more sun and warmer temperatures. The soil adds protection to the bulb and will ensure that it survives even if there is a killing event for the greenery and flower.

You can look forward to next year, when the plant will rise like Lazarus from the ashes and greet you with the assurance of warmer seasons.

Printer Friendly Version
Read more about Crocus
<PreviousNext>
Did you find this helpful? Share it with your friends!
FacebookTweetPinEmail
Related Articles
Newest Articles
You might also like…
Additional Help & Information