What Bulbs Need Chilling: How To Chill Flowering Bulbs 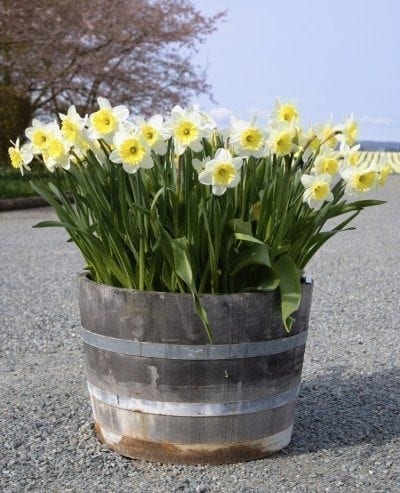 Forced potted bulbs are a common sight in late winter and early spring, but why do they have to be forced? Chilling flower bulbs breaks a cycle that allows the plant to begin growth. This allows the plant to emerge earlier than it would without forced chilling. If you want to know how to fool your bulbs into growing, learn about the chill period for bulbs and the method for early spring blooms.

So exactly what is chilling? Flower bulbs and many seeds require a dormancy period before they are ready for growth. It is a chilling period of a certain number of days. This keeps the embryo from emerging during cold weather, which would potentially kill the new growth.

Bulbs have dormancy periods which vary by type and some, such as tropical flowers, do not require a chilling period at all. If you mimic the cold period the bulb would normally undergo in its natural environment, you can cheat a bit and fool the bulb into sprouting early.

Chilling flower bulbs is easy and can help get an early burst of color in late winter.

How to Chill Flowering Bulbs

Now that chilling has been explained, you will want to know how to chill flowering bulbs. Spring bloomers, such as tulips and narcissus, require a chilling period of 12 to 16 weeks. The highest chilling temperature is around 40 degrees F. (4 C.), so chilling bulbs in the refrigerator is ideal. Just be sure not to store them near any fruit, as the released ethylene gas reduces bloom. Store the bulbs in the refrigerator in a ventilated mesh bag.

The chill period for bulbs varies by species but, as a general rule, the flowers that come up first, even through snow, need the least chilling time and those that arrive later will need the most.

What Bulbs Need Chilling and Which Don’t?

Any bulb that naturally would be in the ground during cold weather needs chilling. An exact list of what bulbs need chilling would be too long for this publication. However, the following bulbs will all need a chilling period for outdoor growth in warm locations or to force the bulbs for the interior:

Late season bloomers do not need to be pre-chilled and may include:

If you live in a warm zone, however, do not expect even the pre-chilled bulbs to produce many flowers. It is normally better to treat them as annuals instead.

Potting Up Chilled Bulbs for Forcing

The container for forced bulbs can actually be quite crowded. A 6-inch (15 cm.) pot holds about six tulip bulbs. Bulbs should be close but not touching.

Use good quality potting soil and make sure the container has excellent drainage. The tops of the bulbs should just be covered by the soil. Keep the soil moderately moist in a cool location until you see green sprouts forcing from the soil.

After flower buds appear, move the pot to a bright window. Soon you will see flowers and the bright promise of spring. It is even possible to plant forced bulbs outdoors in the garden.