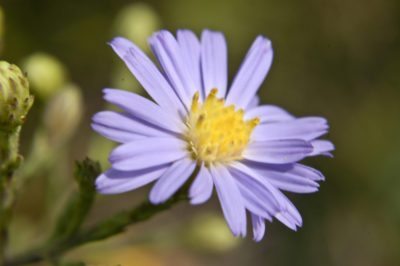 What is Sky Blue aster? Also known as azure asters, Sky Blue asters are North American natives that produce brilliant azure-blue, daisy-like flowers from late summer until the first serious frost. Their beauty continues throughout much of the year, as the foliage of Sky Blue asters turns reddish in autumn, and their seeds provide winter sustenance to a number of appreciative songbirds. Wondering about growing a Sky Blue aster in your garden? Read on to learn the basics.

The rest of the rather unwieldy name pays homage to Ohio’s Olentangy River, where Riddell first found the plant in 1835. This sun-loving wildflower grows primarily in prairies and meadows.

Like all wildflowers, the best way to get started when growing a Sky Blue aster is to purchase seeds or bedding plants at a nursery specializing in native plants. If you don’t have a nursery in your area, there are several providers online. Don’t attempt to remove Sky Blue asters from the wild. It’s rarely successful and most plants die once removed from their native habitat. More importantly, the plant is endangered in some areas.

How to Grow Sky Blue Asters

Blue asters are tough plants that tolerate partial shade, but bloom at their best in full sunlight. Be sure the soil drains well, as asters may rot in soggy soil.

Powdery mildew can be a problem with Sky Blue asters. Although the powdery stuff is unsightly, it rarely damages the plant. Unfortunately, there’s not much you can do about the problem, but planting where the plant gets good air circulation will help.

A bit of mulch will protect the roots if you live in a chilly, northern climate. Apply in late autumn.

Divide Sky Blue aster in early spring every three or four years. Once established, Sky Blue asters often self-seed. If this is a problem, deadhead regularly to limit their spread.

Printer Friendly Version
Read more about Asters
<PreviousNext>
Did you find this helpful? Share it with your friends!
FacebookTweetPinEmail
Related Articles
Newest Articles
You might also like…
Additional Help & Information