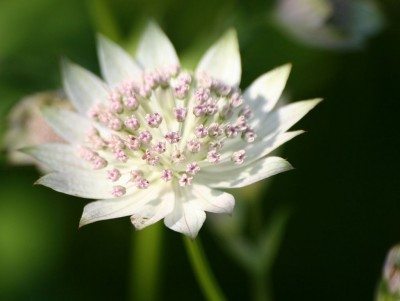 Astrantia (Astrantia major) is a group of flowers, also known as masterwort, that is both beautiful and unusual. This shade-loving perennial is not common to most gardens, but it should be. Let’s take a look at the masterwort plant and how to care for Astrantia.

Astrantia grows to be about 1 to 2 feet (31-61 cm.) tall. Astrantias come in a wide variety of colors. The flowers on the masterwort plant are unusual looking, as they are a group of tightly packed florets that are backed by petal-like bracts. This makes the flower look very much like a star or a firework. The leaves look a little bit like Italian parsley or carrots, which is not surprising as Astrantia are in the same family as carrots.

There are a wide variety of masterwort plant cultivars. Some examples of cultivars include:

The masterwort plant is suitable for USDA plant hardiness zones 4 through 9 and is a perennial. It prefers to be planted in part shade to full shade. Astrantia grows best in moist soil with plenty of organic material.

Since masterwort plant needs moist soil, it needs to be watered frequently during times of drought, otherwise it will die. It should be fertilized once or twice a year for best growth.

Astrantia is propagated either through division or through growing from seed.

To divide the plant, dig up a mature clump in either early spring or early fall. Use a spade and thrust the spade through the masterwort plant clump. Replant the two halves wherever you would like the plants to grow.