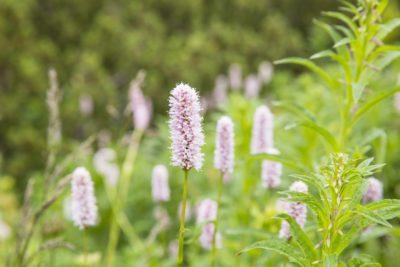 Also known as serpent grass, meadow bistort, alpine bistort, or viviparous knotweed (among many others), bistort plant is commonly found in mountainous meadows, moist grasslands and swampy areas throughout much of the western United States and most of Canada – primarily at elevations of 2,000 to 13,000 feet (600-3,900 m.). Bistort is a member of the buckwheat plant family. Although the plant is sometimes found as far east as New England, it is less common in those areas. Read on for more information about this native plant.

Bistort plant (Bistorta officinalis) consists of long, sparsely leafed stems growing from short, thick s-shaped rhizomes, thus lending to the various Latin (sometimes placed in the genus Polygonum or Persicaria) and common names associated with it. The stems bear spikes of tiny, pink/purple or white flowers in midsummer depending on species. The flowers rarely produce seeds and bistort reproduces by tiny bulbs that develop in the axils of the leaves.

Bistort is suitable for growing in USDA plant hardiness zones 4 through 9. Although it grows in partial shade or full sunlight in most areas, shade is preferred in hot climates. Soil should be moist, rich, and well drained. Add plenty of compost to the soil before planting.

Bistort plant care is simple and the plants require very little attention. Be sure to water bistort generously and don’t allow the soil to dry out. Remove wilted flowers regularly to promote blooming throughout the season. Pick bistort for bouquets as often as you like.

How to Use Bistort

Bistort is used as an ornamental plant, often as a groundcover in boggy areas, along ponds, or in shady, moist areas. It is especially impressive when planted en masse.

Native Americans cultivated bistort shoots, leaves, and roots for use as vegetables, often added to soups and stews or with meat. When ground into a poultice, bistort leaves staunch bleeding. It also soothes boils and other skin irritations.

In Europe, tender bistort leaves are incorporated into a pudding traditionally eaten at Easter. Also known as passion pudding or herb pudding, the dish is often cooked with butter, eggs, barley, oats, or onions.