What Are The Different Types Of Bird Of Paradise Plants 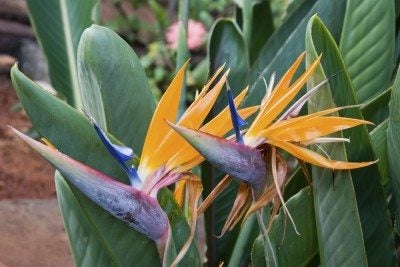 Few plants evince the exotic tropics like the bird of paradise. The unique flower has vivid colors and a statuesque profile that is unmistakable. That being said, the bird of paradise plant can refer to two completely different plants. Read on to learn more about them.

Strelitzia is the common form of the plant in Hawaii, California, and Florida, and the classic birds of paradise recognizable from glossy, tropical pictures and exotic, floral displays. The genus that grows in the southwestern regions of the U.S., however, is called Caesalpinia.

Cultivars of the Strelitzia genus of bird of paradise abound, but the Caesalpinia genus is nothing like the BOP with which most gardeners are familiar. Within both genera, there are numerous types of bird of paradise plants suitable for warm regions in which they’re hardy.

Strelitzia are widespread in Florida, southern California, and other tropical to semi-tropical realms. The plant is native to South Africa and also known by the name crane flower in reference to the bird-like blooms. These flowers are much larger than the Caesalpinia varieties and possess a characteristic “tongue,” usually of blue with a boat-shaped base and crown of fanned petals that mimic the crane’s plumage.

There are only six recognized species of Strelitzia. Strelitzia nicolai and S. reginea are the most common in warm-season landscapes. Strelitzia nicolai is the giant bird of paradise, whereas the reginea species is the standard-sized plant with sword-like leaves and smaller flowers.

The plants are most closely related to banana plants and bear similar tall, wide paddle-shaped foliage. The tallest variety grows up to 30 feet (9 m.) tall and all varieties establish easily in USDA plant hardiness zones 9 and above. They have very little cold tolerance but can be useful as houseplants in cooler regions.

The large bird-headed flowers of Strelitzia are classic and easy to recognize. Caesalpinia is also called a bird of paradise but it has a much smaller head on an airy-leaved bush. The plant is a legume and there are over 70 species of the plant. It produces a pea-like green fruit and showy flowers with large, brightly colored stamens frilled with spectacular smaller petals.

The most popular species of bird of paradise in this genus are C. pulcherrima, C. gilliesii and C. mexicana, but there are many more available for the home gardener. Most species only get 12 to 15 feet (3.5-4.5 m.) tall but, in rare instances, Mexican bird of paradise (C. mexicana) can reach 30 feet (9 m.) in height.

If you are lucky enough to live in one of the higher USDA plant zones, decorating your garden with either of these genera is a cinch. Strelitzia grows in moist soil and requires supplemental moisture in the dry season. It forms a taller plant with larger flowers in partial sun but also performs well in full sun. These bird of paradise plant types do well in warm, humid regions.

Caesalpinia, on the other hand, does not thrive in humidity and requires arid, dry and hot locations. Caesalpinia pulcherrima is probably the most tolerant of humidity, as it is native to Hawaii. Once established in the proper soil and lighting situation, both types of bird of paradise plants will flower and grow with little intervention for decades.