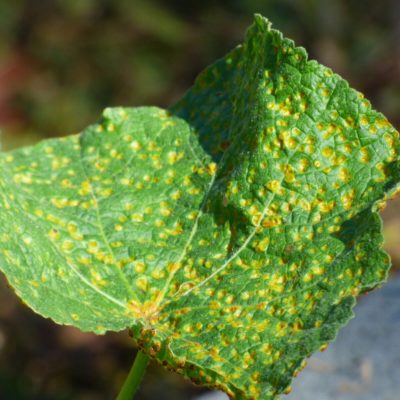 If you’ve ever tried growing hollyhocks in a hot, humid climate you’ve probably seen it—leaves with yellow spots on top and reddish-brown pustules on the undersides that indicate hollyhock rust. If so, we have a few things for you to try before you despair of ever growing this lovely cottage flower successfully. Find out how to control hollyhock rust in this article.

What is Hollyhock Rust?

Caused by the fungus Puccinia heterospora, hollyhock rust is a disfiguring disease that infects members of the Alcea (hollyhock) family. It begins as yellow spots on top of the leaves with rusty pustules on the undersides.

Over time the spots can grow together and destroy large sections of the leaves, causing them to die and drop off. At this point, the stems may also develop spots. Although the plant may not die, you may want to put hollyhocks with rust fungus out of their misery because of the severe disfigurement.

Does hollyhock rust spread to other plants? Yes, it does! It only spreads to other members of the Alcea family, so most of your other garden plants are safe. There are mallow weeds that are members of the family that can act as a host reservoir for the disease, so it’s best to keep weeds away from hollyhocks.

Hollyhock rust disease occurs anywhere you find hot, humid temperatures. This is especially true in the southeast where these conditions persist throughout most of the summer. Below are some hollyhock rust treatments to try. Bear in mind that you’ll have more success if you employ several of these strategies at once.

Printer Friendly Version
Read more about Hollyhock
<PreviousNext>
Did you find this helpful? Share it with your friends!
FacebookTweetPinEmail
Related Articles
Newest Articles
You might also like…
Additional Help & Information