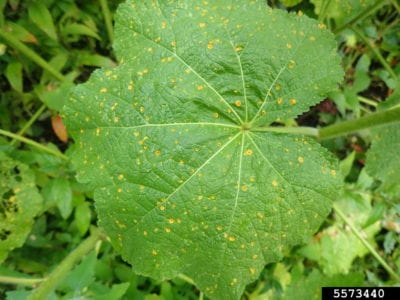 Hollyhocks are charming, old-fashioned plants easily recognized by the tall spikes of colorful blooms. Although hollyhocks tend to be relatively problem free, they are sometimes plagued by leaf spot diseases, especially when conditions are warm and damp. Rust is the most common.

Hollyhocks with leaf spot display small spots which may be brown, gray, or tan, depending on the pathogen. As the spots enlarge, the dead tissue in the center may drop out, which give the leaves a “shot-hole” appearance.

The spots often run together to cover entire leaves when conditions are moist. In dry conditions, the leaves take on a speckled, tattered appearance. You may also notice tiny black spots which are fungal spores.

Water hollyhocks early in the day, using a soaker hose or drip irrigation system, or just let a hose trickle at the base of the plant. Avoid overhead sprinklers and keep the leaves as dry as possible.

Pick off affected leaves and twigs as soon as you notice them. Keep the area under and around the plants clean and free of dead and diseased plant matter. A thin layer of fine bark, pine needles, or other mulch will keep rainwater from splashing on the leaves. Limit mulch to 3 inches (8 cm.) if slugs are a problem.

Thin the plants if the hollyhocks are too crowded. Good air circulation can help prevent hollyhocks with leaf spot and even minimize the disease. Fungicides can be used when new growth emerges in spring if other methods of control aren’t effective. Read the label carefully to be sure the product is suitable for ornamentals.

Printer Friendly Version
Read more about Hollyhock
<Previous
Did you find this helpful? Share it with your friends!
FacebookTweetPinEmail
Related Articles
Newest Articles
You might also like…
Additional Help & Information