Feeding Lantana Plants – What Is The Best Fertilizer For Lantanas 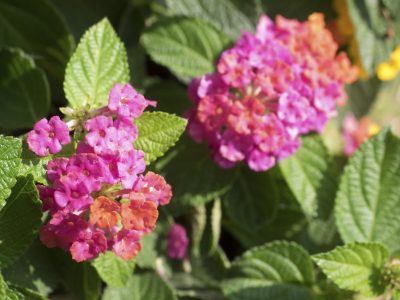 Lantana is a tough plant that thrives in bright sunlight, drought, and punishing heat. Don’t let the toughness fool you though, as lantana, available in a wide range of bright colors, is extremely beautiful and highly attractive to butterflies.

This tropical plant is perennial for growing in USDA plant hardiness zones 8 and above but is widely grown as an annual in cooler climates. It works well in borders and flower beds, and smaller varieties look great in containers. Lantana thrives without a lot of attention, and when it comes to fertilizing lantana plants, less is definitely more. Read on to learn about feeding lantana plants.

Should I Fertilize Lantana?

Should I fertilize lantana? Not necessarily. Fertilizer really isn’t a requirement unless your soil is poor. In this case, lantana benefits from light fertilization in early spring. The exception is lantana grown in containers, as plants in containers aren’t able to draw nutrients from the surrounding soil.

Feed in-ground lantana plants in early spring, using a dry fertilizer. Lantana isn’t picky but, in general, the best fertilizer for lantanas is a good quality, balanced fertilizer with a NPK ratio such as 10-10-10 or 20-20-20.

Lantana plant in containers need regular fertilization, as any nutrients in the potting mix are quickly depleted. Apply a slow-release fertilizer in spring, then supplement with a balanced, water-soluble fertilizer every two to four weeks.

Don’t overfertilize lantana. Although fertilizer may create a lush, green plant, the lantana is likely to be weak and will produce very few blooms.

A thin layer of mulch around the base of the plant keeps the roots cool and helps replenish soil nutrients. Replenish the mulch as it deteriorates.

Printer Friendly Version
Read more about Lantana
<PreviousNext>
Did you find this helpful? Share it with your friends!
FacebookTweetPinEmail
Related Articles
Newest Articles
You might also like…
Additional Help & Information