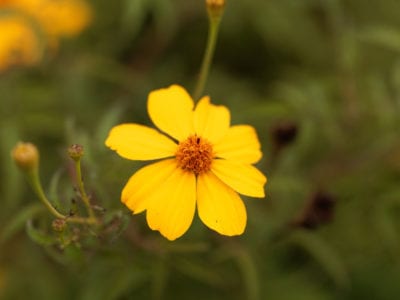 From August through November, hillsides near the Sonoran Desert in North America may look like they are covered in blankets of yellow. This beautiful annual scene is caused by the bloom period of Mountain Lemmon marigolds (Tagetes lemmonii), which may also bloom sporadically in spring and summer, but save their best display for autumn. Click on this article to read more about mountain marigold plants.

We’re commonly asked, “what is bush marigold?” and the fact is the plant goes by many names. Also commonly known as Copper Canyon daisy, Mountain Lemmon marigold, and Mexican bush marigold, these plants are native to the Sonoran Desert and grow wildly from Arizona down into Northern Mexico.

They are upright, evergreen to semi-evergreen shrubs which can grow 3 to 6 feet (1-2 m.) tall and wide. They are true marigold plants, and their foliage is described as heavily scented like marigold with a hint of citrus and mint. Due to their light citrus scent, in some regions they are known as tangerine scented marigolds.

Mountain marigolds bear bright yellow, daisy-like flowers. These blooms may appear all year in some locations. However, in autumn the plants produce so many blooms that the foliage becomes barely visible. In the landscape or garden, the plants are oftentimes pinched or cut back in late spring to early summer as part of mountain marigold care to produce fuller plants that will become covered in blooms during late summer and fall.

How to Grow Bush Marigold Plants

If you live in an area where these plants are common, then growing mountain marigolds should be easy enough. Mountain bush marigolds can grow well in poor soil. They are also drought and heat tolerant, although the blooms may last longer with a little protection from the afternoon sun.