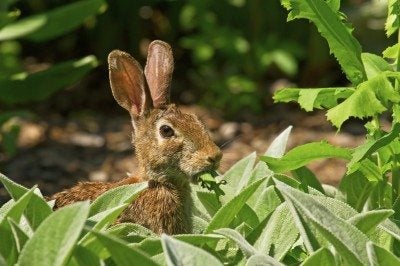 They may be furry and cute, their antics comical and fun to watch, but rabbits lose their appeal quickly when they wreak havoc in the garden by chewing their way through your prized plants. Selecting rabbit resistant plants isn’t a sure-fire solution because the critters will eat nearly anything if they’re hungry and food is scarce. However, although there are no guaranteed rabbit proof plants, some plants are less appetizing and more likely to be passed by.

As a general rule, plants rabbits don’t like include those that have strong scents, spines, prickles, or leathery leaves. Rabbits also tend to avoid plants that exude a milky sap. An innate sense of danger often– but not always– steers animals away from plants that are toxic.

Often, native plants are relatively rabbit resistant more so than non-native (exotic) plants. These may include:

These plants are generally considered to be rabbit resistant.

When it comes to trees, rabbits tend to steer clear of:

Rabbits generally don’t like the prickliness or the flavor and aroma of shrubs such as:

Ajuga is a groundcover with a strong aroma and texture that usually deters rabbits. Other groundcovers and vines rabbits don’t like include:

Ornamental grasses that are usually safe from hungry bunnies include:

Thick-leaved, prickly, or smelly perennials that often discourage rabbits include:

Most herbs have a pungent aroma that deters rabbits. A few examples of rabbit-resistant herbs are:

Bulbs that tend to be relatively rabbit-resistant include: