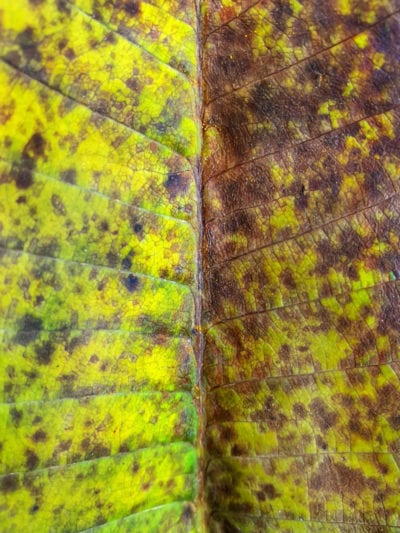 Plumeria, also known as frangipani or Hawaiian lei flowers, are a genus of flowering tropical trees, hardy in zones 8-11. While they are attractive trees in the landscape, they are mostly grown and cultivated for their highly fragrant blooms. Although fungal diseases can happen anywhere, warm, humid, tropical regions are especially favorable for fungal growth. Plumeria rust fungus is a disease that is specific to plumeria.

Plumeria rust fungus is specific to plumeria plants. It is caused by the fungus Coleosporium plumeriae. Plumeria rust affects the foliage of the plant but not the stems or flowers. Its spores are airborne or spread from plant to plant from the backsplash of rain or watering. When the spores make contact with moist leaves, they stick to them, then begin to grow and produce more spores. This fungus is most prevalent in warm, humid seasons or locations.

Usually, the first noticeable symptom of rust on plumeria is yellow specks or spots on the upper sides of the leaves. When flipped over, the underside of the leaves will have correlating powdery orange lesions. These lesions are actually spore-producing pustules. These leaves may curl, become distorted, turn brown-gray, and drop off the plant. If left unchecked, rust on plumeria leaves can defoliate the whole tree in under two months. It will also spread to other nearby plumerias.

How to Treat Plumeria Plants With Rust Fungus

Plumeria rust was first discovered by botanists in 1902 on the islands of the West Indies. It quickly spread across all tropical regions where plumeria grows. Later, the fungus was discovered on commercial plumeria plants on Oahu, quickly spreading throughout all the Hawaiian Islands.

Rust on plumeria leaves is usually controlled by proper sanitation, fungicides, and selecting disease-resistant varieties. When plumeria rust is discovered, all fallen leaves should be cleaned up and disposed of immediately. Affected leaves can be removed, but be sure to properly sanitize tools between plants.

To improve airflow around plumeria, keep the area around them weed-free and not overcrowded. You can also prune plumeria trees to open them up to good air circulation. Fungicides can then be used to spray the plumeria plants and the soil around them. Some studies have shown success in biologically controlling plumeria fungus with midges. However, the use of chemical fungicides kills midges.

While plant scientists are still studying resistant varieties of plumeria, the two species Plumeria stenopetala and Plumeria caracasana have shown the most resistance to rust fungus so far. When planting in the landscape, using a diversity of several plants can keep the entire garden from falling victim to specific diseases.

Printer Friendly Version
Read more about Plumeria
<PreviousNext>
Did you find this helpful? Share it with your friends!
FacebookTweetPinEmail
Related Articles
Newest Articles
You might also like…
Additional Help & Information