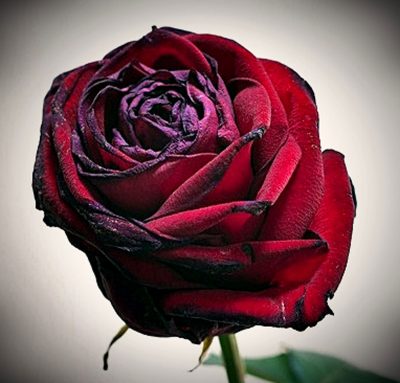 Image by Garden Know How, via Stan Griep

One of the more frustrating things that can happen in rose beds is to have a nice big bud or buds open to a bloom with black or crispy edged petals. This article can help explain why there are black edges on rose petals and what, if anything, can be done about it.

We watch excitedly as those nice big buds develop, and just when they open up, the edges of the petals go to black or a dark crispy brown. Why does this happen and what can we do about it?

More often than not, this condition is caused by either Jack Frost kissing the rose blooms early or late in the season. That frosty kiss creates a burn on those delicate petal edges. There is no way for the rose bush, on its own, to move enough moisture to those extreme petal edges to stop the freeze burn effects, thus resulting in edges of rose petals turning black.

If a frost is coming, cover the roses with an old blanket or towels. I recommend using some support stakes driven into the ground around the roses and then applying such covers. Otherwise, the weight of the cover or a cover that has become wet may break off some of the buds.

The same holds true for those hot summer days with the intense rays of the sun beating down on the roses. Again, the rose, on its own, cannot defend itself against the sun’s attack, so black tips on roses may appear, effectively cooking them. The same holds true on the edges of some of the leaves, which may turn brown and crispy seemingly within a few hours.

Keep the rose bushes well-watered, watering in the cooler morning hours and rinsing off the foliage as well. Be sure to do so early enough to allow time for the water drops to evaporate. Rinse off the foliage with water, as this helps cool down the bush and washes away dust and some fungal spores. That said, I would not recommend doing this on hot, humid days when the evening temps just will not cool off, as it then may increase the chances of a fungal attack. In these times, watering the rose bushes at their base is best.

The wind driving hot or cold dry air at high rates of speed over and through the rose beds can also cause the blackened edges of the petals as well. The reason for it is, again, that the rose bush simply cannot move enough moisture to the extreme edges to prevent the burning, which in this case is called windburn.

Applying insecticidal or fungicidal sprays may actually compound the problem. In fact, mixing pesticide sprays too heavily can cause the edges of petals to burn as well, and will likely be accompanied by rose foliage burn too. Be sure to read the labels on the pesticides you use and stay true to the mixing rates on them.

Botrytis is a fungus that can attack rose blooms but will usually have more of an effect upon the entire blooms rather than just blackened petal edges. Botrytis, also called botrytis blight, is caused by the fungus Botrytis cinerea. Like some other fungi, it is most prevalent in humid or wet weather. Botrytis appears as gray mold on the buds, which often fail to open properly. When open, the petals may have small dark pink spots and blackened edges.

Such a fungal attack can be somewhat controlled by spraying the bushes with a fungicide listed to control Botrytis fungus such as:

Some rose blooms may have natural black or dark edges, such as a rose named Black Magic. In some growing conditions, this rose will have blooms that have very dark red to black petal edges. However, the petal edges are not cracked and/or crispy but of a natural petal texture.