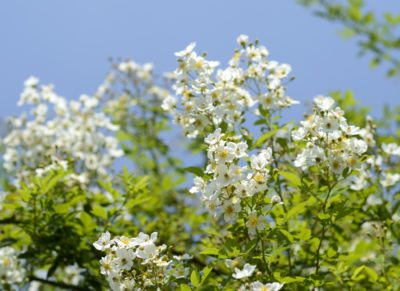 When I first hear of the multiflora rosebush (Rosa multiflora), I immediately think “rootstock rose.” The multiflora rose has been used as the rootstock graft on many rosebushes in gardens over the years. This hardy, almost beyond belief, rootstock has helped us enjoy many roses in our gardens that could not have survived otherwise.

Some beautiful roses have weak root systems if left on their own, unable to survive in many harsh climatic conditions, thus comes the need to graft them onto a root system of another hardy rosebush. Multiflora rose fits that need, BUT comes with a dark side – multiflora roses, on their own, can become invasive.

Multiflora rose was first brought to North America (USA) in 1866 from Japan as a hardy rootstock for ornamental rosebushes. In the 1930’s, multiflora rose was promoted by the United States Soil Conservation Service for use in erosion control and could be used as fencing for livestock. Multiflora rose’s popularity increased, and in the 1960’s it was used by State Conservation Departments as wildlife cover for bobwhite quail, pheasants, and cottontail rabbits. It made a great food source for songbirds too.

So why is multiflora rose a problem? With all this widespread use came a downfall in its popularity, as the plant showed a natural growth habit that seemed to have been ignored or perhaps not realized for many years. Multiflora rose had an ability to escape the areas where planted and became a big problem to cattle grazing lands. Due to its extremely invasive habit, multiflora rose is now classified as a noxious weed in several states, including Indiana, Iowa, and Missouri.

Multiflora rose forms dense thickets where it chokes out native vegetation and inhibits regeneration of trees. The heavy seed production of this rose and its ability to germinate in the soil for up to 20 years make any form of control an ongoing project – I know from personal experience that multiflora is one tenacious rose!

I first met multiflora rose when one of my desired rosebushes was about to die. The new canes coming up at first delighted me, as I thought they were above the graft area and my desired rose was showing signs of renewed life. Wrong, I was. I soon realized that the canes’ shape and thorns were different and the leaf structure was too.

In almost no time at all, more shoots were coming up within inches of the main rosebush. I dug out the old rosebush and as much root system as possible. Yet, more multiflora rose canes kept coming. I finally resorted to spraying all the new shoots with an herbicide. I was concerned about spray drift onto other roses nearby and “painted” it onto the new shoots directly. It took three growing seasons of such treatments to finally eradicate this tenacious plant. Multiflora rose took me to school on learning about hardy rootstocks and had me more prepared to deal with such situations when I had a run in with the Dr. Huey rose rootstock a few years later.

Mutiflora rose will have pretty white blooms and an abundance of them. So if you have a rosebush that used to have totally differently shaped blooms/flares and they have now changed to white on uncharacteristically (as to what the desired rose was) unruly canes, you may now have to deal with multiflora rose.

Depending on how long multiflora has had to establish in your garden or landscape, managing multiflora roses in the landscape can be a seriously long one that requires full attention. As mentioned, methods for the control of multiflora rose typically include digging the bush out, getting as much root system as possible and burn it if you can in your area.

You may also need to apply chemicals/herbicides. Dormant applications in late winter or early spring seem to have some advantage over those during periods of strong growth. Be sure to read the product label thoroughly to protect not only yourself but nearby plants and wildlife.

For more multiflora rose information and control, your local extension office may be of help. Note: Chemical control should only be used as a last resort, as organic approaches are more environmentally friendly.