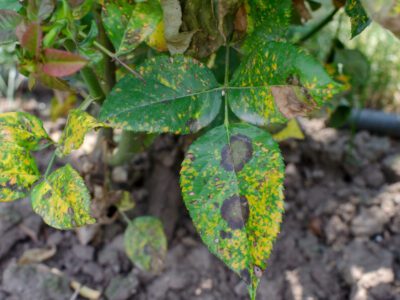 Rust fungus, caused by Phragmidium fungus, affects roses. There are actually nine species of the rose rust fungus. Roses and rust are a frustrating combination for rose gardeners because this fungus can not only ruin the look of roses but, if left untreated, rust spots on roses will eventually kill the plant. Let’s learn more about how to treat rose rust.

Rose rust most commonly appears in spring and fall but can appear in the summer months as well.

Rose leaves that are badly infected will fall from the bush. Many rose bushes affected by rose rust will defoliate. Rose rust can also cause the leaves on a rose bush to wilt.

How to Treat Rose Rust

Like powdery mildew and black spot fungi, humidity levels and temperatures create the conditions for rose rust disease to attack rose bushes. Keeping good airflow through and around the rose bushes will help prevent this rose rust disease from developing. Also, disposing of old rose leaves will prevent rose rust fungus from overwintering and re-infecting your roses next year.

If it does attack your rose bushes, spraying them with a fungicide at intervals as directed should take care of the problem. Also, be sure to dispose of any infected leaves, as they can spread the rose rust fungus to other rose bushes.

Now that you know how to treat rose rust, you can help your rose bush get rid of the rose rust disease that is affecting it. Treating rust on roses is relatively simple and you will be rewarded with rose bushes that are once again beautiful and lovely to look at.