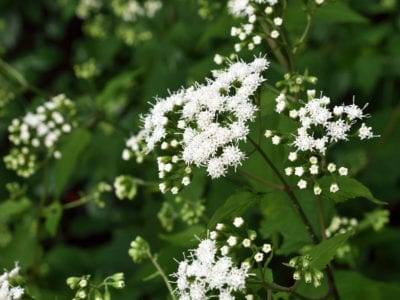 Beautiful native plant or noxious weed? Sometimes, the distinction between the two is obscure. That’s definitely the case when it comes to white snakeroot plants (Ageratina altissima syn. Eupatorium rugosum). A member of the sunflower family, snakeroot is a tall growing native plant of North America. With its delicate clusters of brilliant white blooms, it’s one of the longest lasting flowers in the fall. Yet, this beautiful native plant is an unwelcome guest in livestock and horse fields.

White snakeroot plants have coarse toothed, round-based leaves with pointed tips that grow opposite each other on erect stems that reach 3 feet (1 m.) tall. The stems branch at the top where white clusters of flowers bloom from summer through fall.

Historically, snakeroot plant uses included teas and poultices made from the roots. The name snakeroot came from the belief that a root poultice was a cure for snakebites. Additionally, it was rumored that smoke from burning fresh snakeroot leaves was able to revive the unconscious.  Due to its toxicity, using snakeroot for medicinal purposes is not recommended.

The leaves and stems of white snakeroot plants contain tremetol, a fat-soluble toxin that not only poisons the livestock consuming it but also passes into the milk of lactating animals. Nursing young as well as humans consuming milk from contaminated animals can be affected. The toxin is highest in green growing plants but remains poisonous after frost strikes the plant and when dried in hay.

Toxicity from consuming contaminated milk was epidemic in colonial times when backyard farming practices prevailed. With modern commercialization of milk production, this risk is virtually nonexistent, as the milk of many cows is mixed to the point of diluting tremetol to subclinical levels. However, white snakeroot growing in pastures and hay fields remains a threat for grazing animals.

That being said, many flowers prized as ornamentals contain poisonous toxins and shouldn’t be consumed by people or pets. Having white snakeroot growing in your flowerbeds is no different than cultivating datura moonflowers or foxglove. This shade-loving perennial is attractive in cottage and rock gardens in addition to naturalized areas. Its long-lasting flowers attract bees, butterflies, and moths.

White snakeroot plants are easily cultivated from seed, which is available online. Upon maturity, these cigar-shaped brown or black seeds have white silk-parachute tails which encourages wind dispersal. When growing snakeroot in home gardens, it’s advisable to remove spent flower heads before they release their seeds to prevent widespread distribution.

Snakeroot prefers a rich, organic medium with an alkaline pH level, but can grow in a variety of soils. Plants can also propagate by underground stems (rhizomes) resulting in clusters of white snakeroot plants. The best time to divide root clumps is early spring.