Fern Leaves Have Rust: What To Do For Rusty Looking Fern Leaves 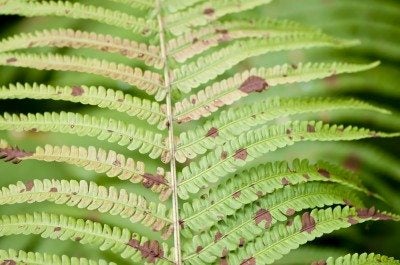 Ferns are lush, green woodland plants valued for their ability to thrive in low light and moist environments where most plants won’t survive. However, the plants sometimes develop strange symptoms such as rusty looking fern leaves.

Rusty fern leaves, often the result of normal growth and development, aren’t always an issue. However, in some cases, rust colored ferns may indicate a more serious problem.

Rust on Back of Fern Fronds

Ferns are ancient plants that propagate themselves in ways that are very different from most plants. One way new ferns are propagated is through the development of millions of tiny spores that fall to the ground where they eventually grow into tiny plants.

Often, rows of rusty brown spots on the back of mature ferns are actually the harmless spore cases. The rusty residue is powdery and some may land on the tops of the leaves.

If your fern leaves have rust that doesn’t appear to be spores, it may require some investigation to determine the cause.

Ferns exposed to too much sunlight may develop rusty brown leaves, sometimes with a crispy appearance on the edges. The solution for this is easy; move the plant to a location where it is in partial shade or filtered sunlight, preferably a place where it is protected from afternoon sunlight. Once the plant is relocated, new fronds should be a healthy, green color.

Ferns may also develop rust colored spots on fronds towards the end of their growing season as they begin to enter dormancy.

There is also a possibility that rusty looking fern leaves are affected by a fungal disease known appropriately as rust. In this case, the rust will look like tiny flakes, which eventually expand to bumps. Rust disease is seen primarily on the undersides of the leaves.

Although rust is unsightly, it usually won’t kill the plant. The best recourse is to clip and discard the affected leaves. Water carefully at the base of the plant and keep the leaves as dry as possible. Some fungicides may be helpful, but read the label carefully to determine if the product is safe for your plant.

Keep the soil evenly moist, as dry soil can cause the leaves to turn reddish-brown. However, don’t water so much that the soil is waterlogged.

Printer Friendly Version
Read more about Ferns
<PreviousNext>
Did you find this helpful? Share it with your friends!
FacebookTweetPinEmail
Related Articles
Newest Articles
You might also like…
Additional Help & Information