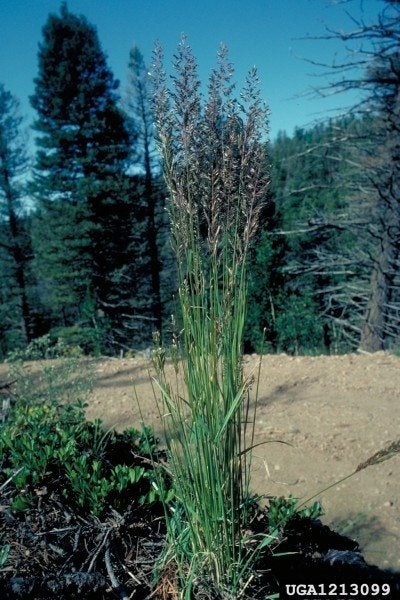 Fescues are cool season grasses which grow primarily in the northern part of the United States up into Canada. Green fescue grass (Festuca viridula) is native to high altitude grasslands and meadows. It is also a useful ornamental specimen. What is green fescue? In its native region, the plant is an important forage species for cattle and sheep. The plant is also called Mountain Bunchgrass or Greenleaf fescue.

What is Green Fescue?

Some botanists and agriculture experts feel green fescue grass is the most important species to the high altitude regions of northern Oregon. It also ranges into Washington and British Columbia. This is a true grass in the family Poaceae, which is a long lived perennial. It grows in thick bunches alongside other native grasses and flowering wildflowers. One of the most important bits of green fescue information is its cold tolerance. This is an alpine plant very adapted to cold seasons.

Greenleaf fescue ornamental grass is a clumping plant. It grows 1 to 3 feet (31-91 cm.) in height and has mostly basal, erect, smooth leaf blades. These are deeply green and may be curled or infolded. The plants active growing period is in spring and summer. It goes semi-dormant in winter and loses its leaves, which regrow the next spring.

The grass is not commercially available as a landscape specimen but it has vigorous seed production and growing green fescue is fairly easy if you get hold of some seed heads. These appear in late spring and are erect, short, and open as well as bluish purple when young. Seed heads mature to tan when ripe.

Green fescue grass is often grown for its ability to stabilize soil. The plant produces coarse, broad roots that are effective in grabbing soil and minimizing erosion. The plant holds protein better than other native grasses in the region, making it an important food source for cattle and especially sheep. It is also heavily browsed by wild animals.

June through August is the primary leaf formation period. Once cool weather arrives, the foliage is not persistent and it has no value to animals. Greenleaf fescue ornamental grass is attractive in the landscape only for a short period and is better used in fields as fill plant material and cattle feed.

While seed is not commonly available, a few wildlife and agricultural retailers do carry it. The plant requires moisture to establish and cold seed stratification. Soil should be well-draining, of moderate fertility, and have a pH between 6.0 and 7.3. Your region should have a minimum of 90 frost free days to make use of this grass.

Plant seeds in fall before freezing temperatures arrive and let nature provide the stratification or place seed in the freezer for 90 days before planting out in the early spring. Provide even moisture once you see the seedlings. The seeds can be sown fairly close together for a turf effect.

This is not a true ornamental but can provide a meadowland enhancement when paired with lupines, Penstemon, and other native fescues.