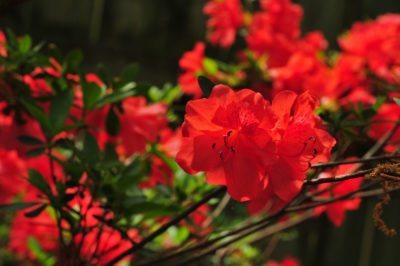 No, “Fashion Azalea” is not the name of a hot new designer of clothing for the stars. What is a fashion azalea? It’s the common name of a vivid azalea cultivar that you might want to invite into your garden. It you want more fashion azalea information, or tips on how to grow fashion azalea, read on.

What is a Fashion Azalea?

A fashion azalea (Rhododendron x ‘Fashion’) is an evergreen shrub with brilliantly fiery blossoms. The azalea cultivar ‘Fashion’ grows upright to 5 feet (1.5 m.) tall and wide. It is covered with crimson or salmon colored flowers from autumn through winter.

According to fashion azalea information, this cultivar blooms in spring, fall, and winter unless its progress is halted by a serious frost. The flowers remain on the branches long after they fade.

If you are considering growing fashion azaleas, you may want to know the cultivar’s history. It resulted from an extensive breeding program by the USDA at Glenn Dale, Maryland. It is one of the 4,500 varieties called the Glenn Dale hybrids. Many Glenn Dale azalea varieties are vigorous plants with large blossoms that have greater cold hardiness than standard azalea shrubs. There are many varieties that bloom in mid and late season. ‘Fashion’ is a midseason bloomer, and its flowering peaks in late spring.

If you are growing Glenn Dale hybrids, you can achieve a continual bloom of azaleas for much of the year. Many gardeners prefer a succession of blooming azaleas rather than one big explosion of color. Fashion azaleas grow best in USDA plant hardiness zones 7 through 10. If you live in one of these zones, growing these azaleas is easy.

As for Fashion azalea care, you will be pleased to learn how undemanding this cultivar is. Plant fashion azalea shrubs in shade, partial shade, or sun and they will still be happy. Provide your shrubs with well-drained, organically rich soil and give them regular and generous irrigation during establishment.

More fashion azalea information tells us these are acid-loving plants, so treat them to an acid-based fertilizer once the shrubs have bloomed. As part of your fashion azalea care, protect their roots from sun and cold by adding a thick layer of mulch over the root zone.