Growing And Caring For Maidenhair Ferns 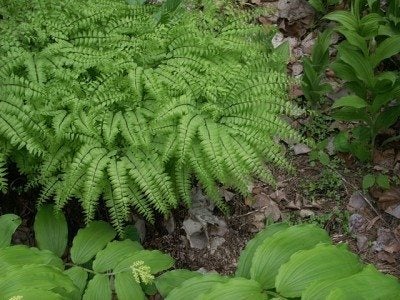 Maidenhair ferns (Adiantum spp.) can make graceful additions to shady gardens or bright, indirect areas of the home. Their light gray-green, feathery-like foliage adds unique charm to just about any landscape setting, especially moist, wooded areas of the garden. Growing maidenhair fern is easy. This North American native makes an excellent specimen plant on its own or in a group. It also makes a great groundcover or container plant.

Maidenhair fern history is quite interesting. Its genus name translates to “non wetting” and refers to the fronds’ ability to shed rainwater without becoming wet. In addition, the plant is the source of an aromatic, volatile oil commonly used as a shampoo, which is where its common name of maidenhair derived.

Another name for this plant is the five-fingered fern due largely in part to its finger-like fronds, which are supported on dark brown to black stems. These black stems were once used as a dye in addition to being employed for the weaving of baskets. Native Americans also used maidenhair ferns as poultices for wounds to stop bleeding.

There are numerous maidenhair species, though the most commonly grown include:

How to Grow a Maidenhair Fern

Learning how to grow maidenhair fern in the garden, or even indoors, is not difficult. The plant typically grows in partial to full shade and prefers moist but well-draining soil amended with organic matter, much like in its natural habitat in humus-rich woods. These ferns do not tolerate dry soil.

Most ferns grow best in slightly acidic soils; however, maidenhair ferns prefer a more alkaline soil pH. Adding some ground limestone to the potting mix of container grown plants or mixing it into your outdoor beds will help with this.

When growing maidenhair fern indoors, the plant prefers small containers and dislikes repotting. Maidenhair is also intolerant of low humidity or dry air from heating or cooling vents when grown in the home. Therefore, you will either need to mist the plant daily or set it on a water-filled pebble tray.

Caring for maidenhair ferns is not very demanding. While it needs to be kept moist as part of its maidenhair fern care, you need to be careful not to overwater the plant. This can lead to root and stem rot. On the other hand, don’t let the maidenhair dry out either. In the event it does accidentally dry out, don’t be so quick to throw it away. Give it a good soaking and the maidenhair fern will eventually produce new leaves.