Fixing Your Soil When Soil Is Too Acidic 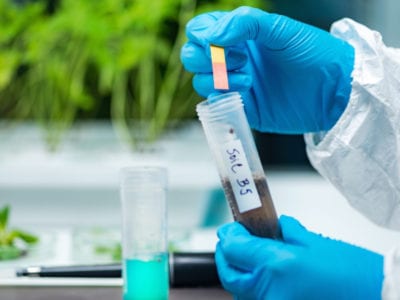 Many gardens start out as great ideas only to find that things don’t grow quite as planned. This could very well be because the soil is too acidic to support the life of some plants. What causes acid soil? There are many things that can cause the soil to be too acidic.

Sometimes there could be too much aluminum in the soil, making it acidic. Sometimes there is too much manganese, which is toxic to plants. If the soil is too acidic, it can be because of a calcium and magnesium deficiency, which is just as bad for plants as it is for humans. Iron and aluminum in great amounts can tie up phosphorus, which also makes the soil too acidic for plants.

Another thing to consider if your soil is too acidic is poor bacterial growth. This is because with bacteria, the soil becomes more alkaline, and if there isn’t enough of the good bacteria, your soil will not be fertile enough to support life.

So what causes acid soil? Many things can do it, from natural soil pH to the types of mulch you use. Acidic soil can have mineral deficiencies just like the human body, and unless these deficiencies are fixed, the plants won’t live. So if your soil is too acidic, you’ll need to correct it.

How to Lower Acid Amount in Soil

The most common way to raise the pH of soil is to add pulverized limestone to the soil. Limestone acts as a soil acid neutralizer and consists of either calcium and magnesium carbonate or calcium carbonate. These are called dolomitic limestone and calcitic limestone respectively.

The first thing that needs to be done is a soil test to see how acidic the soil actually is. You want your soil pH to be around 7.0, or neutral. Once you have run the soil test and have the results, you will know which kind of pulverized limestone to add as a soil acid neutralizer.

Once you know the kind of soil acid neutralizer to add to your soil, apply the lime according to the instructions given to you by the garden center. Never apply more than necessary.

Making sure you know what causes acid soil is important, but be careful not to add too much limestone in your efforts to correct it. If you end up with alkaline soil, you could have other problems like iron, manganese, and zinc deficiencies, which also won’t support life. Further, you could end up with an overgrowth of bacteria in the soil, which can kill those things that spend a long time underground, like potatoes.